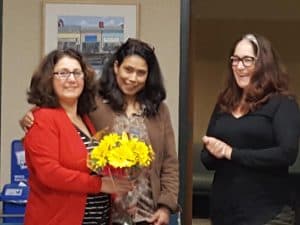 Receiving the honor for the CCSCC were Sonia Karroum  (far left) and Nancy Perdomo-Browning. Authorized by the California State PTA, this award is given to recognize, as the most prestigious of the Honorary Service Awards, an individual or organization that has made significant contributions to the welfare of children and youth in a school or community.