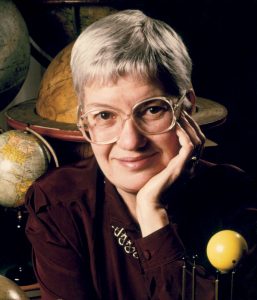 Renowned astrophysicist and National Medal of Science awardee Vera Rubin passed away in Princeton, N.J., the evening of December 25, 2016, at the age of 88. Rubin confirmed the existence of dark matter—the invisible material that makes up more than 90% of the mass in the universe. She was a retired staff astronomer at the Carnegie Institution’s Department of Terrestrial Magnetism in Washington, D.C.

“Vera Rubin was a national treasure as an accomplished astronomer and a wonderful role model for young scientists,” remarked Carnegie president Matthew Scott. “We are very saddened by this loss.”

In the 1960s, Rubin’s interest in how stars orbit their galactic centers led her and colleague Kent Ford to study the Andromeda galaxy, M31, a nearby spiral. The two scientists wanted to determine the distribution of mass in M31 by looking at the orbital speeds of stars and gas at varying distances from the galactic center. They expected the speeds to conform to Newtonian gravitational theory, whereby an object farther from its central mass orbits slower than those closer in. To their surprise, the scientists found that stars far from the center traveled as fast as those near the center.

After observing dozens more galaxies by the 1970s, Rubin and colleagues found that something other than the visible mass was responsible for the stars’ motions. Each spiral galaxy is embedded in a “halo” of dark matter—material that does not emit light and extends beyond the optical galaxy. They found it contains 5 to 10 times as much mass as the luminous galaxy. As a result of Rubin’s groundbreaking work, it has become apparent that more than 90% of the universe is composed of this invisible material. The first inkling that dark matter existed came in 1933 when Swiss astrophysicist Fritz Zwicky of Caltech proposed it. But it was not until Rubin’s work that dark matter was confirmed.

Besides her remarkable scientific contributions, as noted by colleague Neta Bahcall of Princeton University, “Vera was an amazing scientist and an amazing human being—a pioneering astronomer, the ‘mother’ of flat rotation curves and dark-matter, a champion of women in science, and a mentor and role model to generations of astronomers.”

She was an ardent feminist, advocating for women observers at the Palomar Observatory, women at the Cosmos Club, Princeton, and she even advised the Pope to have more women on his committee.

Rubin was born July 23, 1928. She arrived at Carnegie’s Department of Terrestrial Magnetism in Washington, D.C., in 1965. A Washington native, she graduated from Calvin Coolidge High School and went on to receive her B.A. from Vassar College. She obtained her M.A. from Cornell University and her Ph.D. from Georgetown University, where she then taught for 10 years. Rubin was the first woman allowed to observe at the Palomar Observatory.

In 1993 Vera Rubin received the National Medal of Science—the nation’s highest scientific award. She was elected to the National Academy of Sciences in 1981, and in 1996 became the first woman to receive the Royal Astronomical Society’s Gold Medal since Caroline Hershel, who was awarded the prize in 1828.