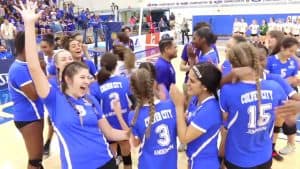 Culver Club Volleyball and Culver City High School girls volleyball teams have combined for a great 2016.
After winning the prestigious Summer Soiree Volleyball Tournament, many of the Culver Volleyball Club teammates played on the Culver City High School volleyball team, which went on to win its first ever CIF Championship.
The Lady Centaurs started the season slowly, and peaked to win the Ocean League title along with Santa Monica High School before capturing the CIF Division 5 crown.
Culver City won its first California State playoff game against Carson then lost a competitive match in the second round to Crossroads High School, which advanced to the State finals:
Culver City High School was well represented in the selection of All CIF players: Jessica Stewart, Junior setter, Division 5 Player of the Year. Lena Johnson, Junior outside hitter, All CIF First Team. Krista Hernandez, Senior libero, All CIF First Team. Tanner Siegal, Division 5 Coach of the Year.
“What is very exciting is that Culver City High School loses some very good seniors, but returns a majority of this year’s players along with strong players from the lower level teams. Girls’ volleyball in Culver City is definitely on the rise thanks to the great work of the teams, coaches and administrators,” said Culver Club Volleyball director Marty Siegal.