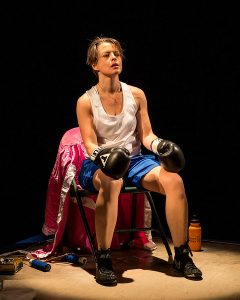 Boxing is not my thing. The list of sports I am not interested in watching is pretty lengthy, and boxing is at the bottom of that list. Theater is something I love to watch, and when seated beside the boxing ring inside the Kirk Douglas Theater for the opening of “The Wholehearted” I already knew there was a twist here that would open my eyes; the boxer is a woman.

Suli Holum plays Dee Crosby, a female boxing phenom, taking a moment to make a video tape for her ex and hopefully future girlfriend, explaining that she is leaving her promoter/trainer/ husband after one last payback. The stage is set for a fight, with the video monitors above broadcasting her victories, her memories and her interview, there is also a standing mike that turns her into a crooner, taking the hard world of the training gym into the fantasy of the nightclub singer.

Holum is every inch the fighter, and you don’t doubt for a moment that she is the knockout queen. Her tales of flirtation with both girlfriend Carmen and husband Mike offer a portrait of a hunger not easily satisfied. The way the story is sculpted reminded me of Paddy Chayefsky’s Requiem for a Heavyweight,  but Dee is fighting another battle, even more crucial than survival in a brutal sport; outwitting an abusive husband. She’s not just trying to salvage her career, she’s fighting for her life.

While the technical boost of monitors and microphones gives Holum easy access to other dimensions, she fully inhabits all the persona she pulls up onstage; the boxer, the husband, the girlfriend, the nightclub crooner. Every part of the performance is  a physical task, sparring with the punching bag, fighting as if her opponent were taking her down. Every time she pulls up and gets back on her feet, we can feel how much harder it gets. But she won’t give up.

This past week, The New Yorker Radio Hour broadcast a profile on professional boxer Heather Hardee, going into depth about the advent of women in the sport, the work and the money involved. Women in the ring fighting other women is still novel, but the old battle of trainers, fighters and the betting crowd is ongoing.

Using the sport of boxing as metaphor for how women fight (and fight back) gave writer and co-director (along with Suli Holum) Deborah Stein a great show. There was one cliché that was part of a song at the end that almost spoiled it all for me. While it wasn’t out of character, it made the persona of Crosby almost cartoonish, and if she’s a cartoon, there’s no sympathy for her struggle.

If boxing is a sport you love, this show is one you must see. When women step into the ring, the sport changes. How it changes them feels like a part of the current moment in a deep and powerful way.

For tickets, go to www.centertheatregroup.org/tickets/kirk-douglas-theatre/douglasplus-201617/the-wholehearted/