Friday morning I was grateful and encouraged to be part of a loving display of solidarity for Culver City’s Muslim community at the King Fahad Mosque. As worshippers arrived for the 1 o’clock prayer service they were greeted by men and women from the surrounding neighborhoods holding signs of support and children and parents making sidewalk chalk drawings on the sidewalks surrounding the Mosque declaring gratitude for and solidarity with the Muslim community. Looks of curiosity and sometimes mistrust were replaced by (often teary-eyed) smiles and children meeting each other and adults sharing hugs and words of compassion and concern and gratitude.
We were then invited in to listen to the prayer service, which focused on seeing the potential for good to come out of even the darkest, most evil of times and sought to reassure an alarmed post-election congregation. King Fahad Mosque is one of many mosques nation-wide that received a horrific, hate-filled letter threatening genocide of the entire Muslim population in the United States under President Trump in the weeks after the election.
At the conclusion of the prayers, we guests were welcomed to stand before the worshippers and were 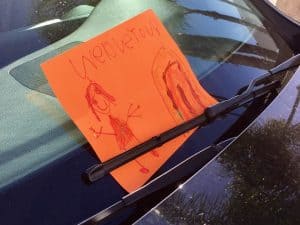 thanked for being there to demonstrate that there are many more of us offering loving, open hearts and friendship even in the aftermath of this election than there are trying to sow the seeds of hate. City Council member Jeff Cooper, MOMs Club (Culver City East chapter) member Abby Wood, and Pastor Frances Rosenau of Culver City Presbyterian church then each spoke briefly of our gratitude for the diversity of this community, including our Muslim community members, and our collective commitment to make sure that all members of our community feel valued and safe here in Culver City.
After the service, worshippers came out to their cars to find hand written cards and drawings with messages of love and support made by Culver City children on their windshields. One of these cards written by a four year old read “Are you ok? I will be your friend.” Out of the mouths of babes!

I am so grateful to live in such a diverse community that is aware of how blessed it is by this diversity and determined to spread love, not hate! Thank you to everyone who organized and participated in this beautiful display of solidarity.
Lila Swenson,