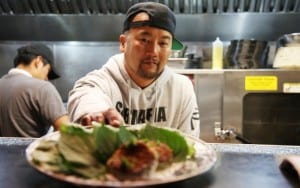 The James Beard Foundation has given a ‘Best Restaurateur’ nomination in their national 2016 awards to Roy Choi. Choi, whose Kogi food truck innovation had already made him a big name in the game before he grabbed the old House of Pancakes on Washington Boulevard and turned it into the amazing A-Frame. His most recent adventure with chef Daniel Patterson has been to open LocaL in Watts, bringing healthy and inexpensive food to a community long underserved.

About his Culver City location, Choi says “A-Frame has always been Hawaiian. Look at our popcorn, our ribs, our island Maui onion salad.  It was a translation of aloha in an abstract sense. A modern space filled with communal picnics and sharing and generosity.”

When Jon Favreau did his film “Chef‘” in 2014, Choi served as co-producer and oversaw all menus and food production on the film – which bears a more than passing resemblance to his own biography.

With A-Frame in Culver City, along with Chego, Sunny Spot, Pot, the above mentioned LocaL and the always welcome Kogi trucks, Choi does a lot to bring good food to Southern California. We hope this award goes to a very deserving chef who shares his joy in feeding people in so many different and delicious ways.