SURF’S UP IN THE GALAXY: DETECTION OF GRAVITY WAVES. The announcement February 11 of the detection of gravitational waves by the LIGO (Laser Interferometer Gravitational-wave Observatory) team marks the beginning of a new kind of astronomy, according to astronomer Laurance R. Doyle of SETI Institute and Principia College.

At about the time the first plants appeared on Earth—long before there were any land animals—two black holes (former suns) about 30 times the mass of our Sun collided at almost the speed of light, producing enough energy to cause a measureable ripple in the very fabric of spacetime. That wave—if something that is millions of miles long and yet only sub-millimeter in height can be called a “wave”—was headed for Earth, to arrive last September 14 after a 1.3-billion-year trip.

The LIGO observatory involves two laser beam paths that are combined so that any shift along one path will produce a change in the way the other path interacts with it, at the level of the wavelength of laser light. By measuring the change in distance between the two paths, one can tell if minute changes along any one path have occurred. Such a change is what the LIGO Team detected.

“Today, the new observational field of gravitational-wave astronomy has come of age, says Doyle. “It’s the day humankind first caught a gravity wave in the fabric of spacetime to surf into the future!”

A NEW KIND OF LIGHT. As the gravitational waves warped space-time within LIGO’s gargantuan, twin detectors, the observatory’s exquisitely sensitive instruments registered vibrations on the order of thousands of the diameter of a proton. The frequency of these waves that LIGO is designed to catch is actually in the audible range for humans. Accordingly, the signal LIGO received was played on speakers to audiences of eager scientists.

“For this binary black hole system, it made a distinctive, rising ‘whoooop!’ sound,” said Matthew Evans, an assistant professor of physics at Massachusetts Institute of Technology (MIT). “This detection means that the stars are no longer silent. It’s not that we just look up and see anymore, like we always have—we actually can listen to the universe now. It’s a whole new sense, and humanity did not have this sense until LIGO was built.” 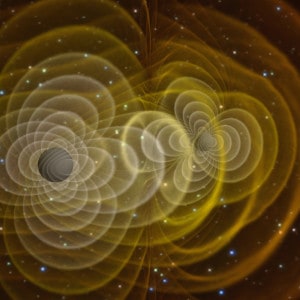 astronomy,” says Will Kinney, professor of physics at the New York University at Buffalo (UB). “It’s like being able to see a new kind of light. Gravity wave telescopes will allow us to observe directly entirely new phenomena that have been inaccessible to us previously.”

“We can now study black holes and other violent events in our universe—like mergers of very massive and dense stars—directly,” says Dejan Stojkovic, UB associate professor of physics, who has done theoretical research related to black holes. “In the past, we’ve had to rely on light that is coming from these events. Now we can study them directly through gravity waves, even if they do not emit any light.”

Perhaps even more importantly, gravitational waves could enable scientists to explore the very early stages of the universe, Stojkovic says.

These stages are impossible to study with light because the very early universe was “so hot and dense that it was opaque to light,” he says. But gravitational waves can freely propagate through the hot plasma of the very early universe, so scientists can use them to gain insight into what occurred during that otherwise invisible time.