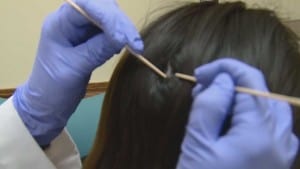 No, I’m not being metaphorical – there may be a lice outbreak at the high school that seems to be flying under the radar because – well, because lice. No one is particularly proud to announce they have bugs, but there’s no reason to keep it a secret.

The good news is that our kids are not having a secret outbreak of herpes or heroin addiction. It’s a not-fatal, pretty painless, fault free problem. But it is a problem and it needs to be addressed. Ironically, people who shampoo frequently can still get lice. Your hair can be quite clean and yet the bugs are still able to make a home in it. Lice are not affected by conditioner, gel or hair dye.

My concern began to dawn when I had an accredited lice-checker tell me that they knew of several cases in Culver City. I went to CVS to buy the shampoo & cleaning kit, and was told by the cashier ” Yeah, this stuff is flying off the shelves. We’ve sold a lot of these in the last week.” Although I didn’t ask if ‘a lot’ was a dozen or a hundred, when I went back the next day, stock was noticeably depleted.

When I spoke to the estimable Diana Castro, our school nurse, she said reporting was in the low single digits. I don’t doubt her for a moment – Ms. Castro does a great job at the school, but it means that kids (and parents) are keeping this to themselves, probably out of embarrassment. While I have heard of many more cases than that in just the last few days, it’s all been anecdotal evidence, so I’m not presenting this as hard journalism. It’s a thought.

There’s nothing to be ashamed of, and like any problem, you can’t resolve it while you are pretending it doesn’t exist. Quite probably you are not even aware of it. Who doesn’t feel like scratching their head once in a while? Who wants to think about icky bugs?

Also, Ms. Castro emphasized – they are not spreading lice at school. The kids are not even allowed to wear hats let alone share them. So, it’s probably a weekend party/birthday sleepover/group selfie kinda contagion. And it’s not really the time of year; lice tend to be much more common after Spring Break, when the kids have all been to camp or with the cousins or on the college tour.

But the school policy is that only live lice are going to get you sent home. Nits are not officially considered a health issue.

Those of us who recall the great El Marino Lice Outbreak of 2010, it’ s time to get your surgical gloves and wooden chopsticks out of storage.  Or call your favorite consultant. Take your teenager outside and comb completely. Rinse and repeat as needed.