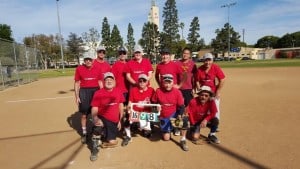 Bending their bodies cautiously at ground balls, lofting outfield flies and ambling around the bases, some 100 senior softball players will begin the Culver City Senior Softball season, Jan. 24, at Veterans Park.
The quarter century old Culver City Softball Association is a serious slow-pitch league played year round that provides an opportunity for its members to have fun playing a game they love and enjoy making new friends.
Games are played Sundays at Veterans Park, involving men over the age of 55 and women over 45. Interested players of all skill levels may drop by the fields at the southwest corner of the park any Sunday, starting at 8:30 a.m. to meet any of the seven team managers to be added to a team or as pool players. League fees are $110 for the year. Pool players play for free until they become rostered.
Sorrento Italian Market sponsored league champion Red Team managed by veteran player and manager Bart Mills. The Red Team finished the regular season in fifth place and came out on top in the eight-game post-season series.
“It’s not the size of the dog in the fight that counts. It’s the size of the fight in the dog,” said Mills at the awards ceremony following the championship game played in early December.
Sponsors this season are BrokButcher.com (a South Bay Realtor), Sorrento’s, Factors Deli, Cantalini’s Salerno Beach Restaurant, Johnnie’s Pastrami and Galen Financial.