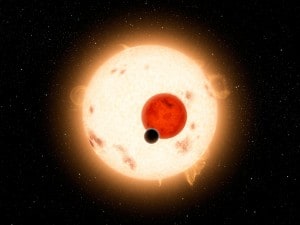 The fantasy creations of the “Star Wars” universe are strikingly similar to real planets in our own Milky Way galaxy. A super-Earth in deep freeze? Think ice-planet Hoth. And that distant world with double sunsets can’t help but summon thoughts of sandy Tatooine.

The most recently revealed exoplanet possessing Earth-like properties, Kepler-452b, might make a good stand-in for Coruscant—the high-tech world, seen in several Star Wars films, whose surface is encased in a globe-spanning city. Kepler-452b belongs to a star system 1.5 billion years older than Earth’s. That would give an advanced civilization more than a billion-year jump on us. The denizens of Coruscant not only have an entirely engineered planetary surface, but an engineered climate as well. On Kepler-452b, conditions are growing warmer as its star’s energy output increases—a symptom of advanced age. If this planet (which is 1.6 times the size of Earth) is truly Earth-like, some climate engineering might be needed there as well.

The planet Mustafar, scene of an epic duel between Obi-Wan Kenobi and Anakin Skywalker in “Revenge of the Sith,” has a number of exoplanet counterparts. These molten, lava-covered worlds, such as Kepler-10b and Kepler-78b, are rocky planets in Earth’s size range whose surfaces could well be perpetual infernos.

The planet OGLE-2005-BLG-390, nicknamed “Hoth,” is a cold super-Earth, with a mass five times that of Earth and a surface temperature estimated at minus 364 degrees Fahrenheit. That most likely means no Hoth-style tauntauns to ride, or even formidably fanged abominable snowmen (aka wampas). Astronomers used an extraordinary planet-finding technique known as microlensing to find this world in 2005—one of the early demonstrations of this technique’s ability to reveal exoplanets. In microlensing, backlight from a distant star is used to reveal planets around a star closer to us.

environment, swept by sandstorms as it roasts under the glare of twin suns. Real exoplanets in the thrall of two or more suns likely have even harsher environments. Kepler-16b was the Kepler telescope’s first discovery of a planet in a “circumbinary” orbit—circling both stars, as opposed to just one, in a double-star system. This planet, however, is likely cold, about the size of Saturn, and gaseous, though partly composed of rock. It lies outside its two stars’ “habitable zone,” where liquid water could exist, and its stars are cooler than our sun—all of which probably adds up to a lifeless Tatooine.

Endor, the forested realm of the Ewoks introduced in “Return of the Jedi.” is a moon orbiting a gas giant. Detection of exomoons—moons circling distant planets—is still in its infancy for scientists here on Earth. A possible exomoon was observed in 2014 via microlensing. It will remain forever unconfirmed, however, since each microlensing event can be seen only once. If the exomoon is real, it orbits a rogue planet, unattached to a star and wandering freely through space. The planet might have hung on to its moon after somehow being ejected during the early history of a forgotten planetary system.

The hunt for exomoons could actually have powerful implications in the search for life beyond Earth. If exomoons are shown to be potentially habitable, this would open another avenue for biology; habitable moons might even outnumber habitable planets. Could they have bustling ecosystems, with life forms even more exotic than Endor’s living teddy bears, swinging between trees Tarzan-style? Stay tuned.