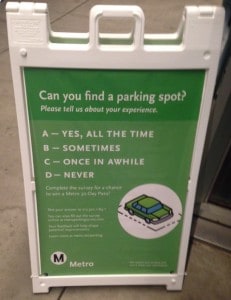 Metro’s The Source announced an online survey in which the agency is soliciting input on its station parking. Click the link at the bottom of the post to take the survey here – participants are eligible to win a monthly transit pass. Metro’s survey is one of the first steps in Metro’s Supportive Transit Parking Program (STPP) Master Plan.

Streetsblog has been pretty critical of Metro’s massive investment in free parking at many of its stations. It doesn’t take a Shoupista to understand that surrounding station portals with massive parking lots does not make great places where transit riders want to go. Even Metro’s 2015 American Public Transportation Association review stressed that subsidizing parking works against Metro’s equity and environmental goals. Money Metro chooses to invest in subsidizing parking serves the roughly ten percent of Metro riders who drive, at the expense of the nearly 90 percent who predominantly arrive by foot.

The survey is a little frustrating. As pointed out by The Source commenter Ron, the first question asks how you get to Metro’s (rail) stations. You are only allowed one answer, and this shapes what future questions you get to respond to.

Metro is posting parking survey promotional signs at some stations, but apparently not others. Damien Newton spotted the above sign at the Metro Expo Line Culver City Station, which features $2.5 million dollars worth of free parking. I haven’t seen any sandwich board signs yet at the Vermont/Beverly or Wilshire/Vermont stations, which coincidentally feature no free parking.

Nonetheless, take the survey to get Metro’s parking plan off to a good start.