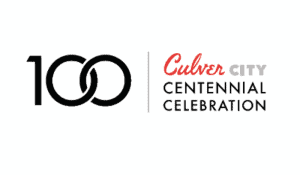 Culver City won’t be 100 until September 20, 2017, but planning for that landmark anniversary began back in 2014, and culminated Monday in the launch of a global website to tell the world about it.
The Culver City Centennial Celebrations Committee led by City Councillor Jim Clarke organized the plans, brought in experts, involved the community and this week launched the official website, which is where the public comes in.
Go to culvercity100.org and find plans for the year-long celebration to begin September 24, 2016, and culminate with a grand celebratory finale on September 23, 2017.
“We planned to raise $100,000,” Clarke said at Monday’s council meeting, “but after four weeks of fundraising, we have a total of $104,500, way in excess of our goal.” He thanked local businesses for stepping up to cover the costs.
On the website, there’s a count-down calendar for the Centennial Year, with places to sign up to be a Centennial Ambassador, participate in the parade or organize an event to help the city celebrate.
“Groups can suggest activities they want to do,” Clarke said. “Once approved, they will be entered on the calendar.”
Although the calendar has plenty of empty spaces now, hopes are that local groups, already contacted by committee members in person, will offer a steady stream of events to commemorate Culver City past and present.
Citizens can also donate to the celebration expenses on the site, which are funded by businesses and the public and separate from the city government, Clarke said.
There is space to share personal stories and history of Culver City; its people, history, events and attractions on the website.
Clarke invited council members and the public to visit the site and get acquainted with it. There are now just 11 months left before the big Centennial Year festivities begin, and time is ticking.
“We are very pleased with the fundraising, and the way things are going,” Clarke said, adding that the committee will be in good hands when he steps down as chair.