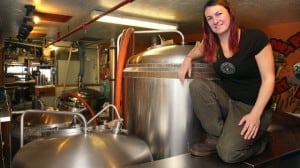 Devon Randall, head brewer at Pizza Port in Solana Beach, has taken a job as brewmaster at Arts District Brewing Company, 213 Hospitality’s latest project (which does not yet have an opening date). 213 Hospitality and its founder Cedd Moses have helped define downtown L.A.’s craft cocktail and nightlife scene over the last 10 years with bars like Las Perlas, Caña and Seven Grand. Even though much of 213’s work has been liquor-focused, the company supports craft beer at all its bars and organizes the annual Los Angeles Craft Beer Crawl. The brewery — which finds 213 teaming up with Brian Lenzo of Blue Palms Brewhouse in Hollywood — is its first foray into craft beer production.

“I took the opportunity to move to L.A. because it is a great next challenge for me,” Randall says. “I am participating in the build-out of the brewery and creation of the brand. I think downtown L.A. and I will be a natural fit.”

Randall is originally from L.A. She grew up on the Westside and later joined the Culver City-based Pacific Gravity homebrew club. She moved to San Diego five years ago to get brewing experience and worked at SoCal powerhouse Lost Abbey (helping them run their extensive barrel program) and Pizza Port Ocean Beach (where she trained under local legend Yiga Miyashiro) before taking the job at the Solana Beach location in early 2013.

In the last two years, she has won a medal at the Great American Beer Festival (a bronze for her oatmeal stout, Oat) and created many of Solana Beach’s popular West Coast-style beers, including Ponto, a session IPA that is now brewed and canned year round under the Pizza Port brand.

“I think that I have a unique understanding of L.A.’s culture and the growing L.A. beer scene,” Randall says.

Named after the neighborhood in which it will reside, specific plans for Arts District Brewing’s beer offerings and brewing plans have not been released. A few years ago Moses applied for permits to convert its 17,000-square-foot building on Traction Avenue into a pizza-slinging brewpub with 27 skeeball lanes.