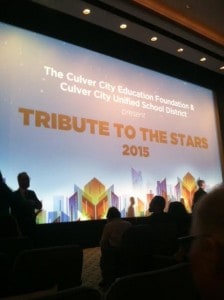 What makes the Culver City Unified School District so special? The people who give it their best, all year round. The Culver City Education Foundation’s 16th annual festival of volunteer appreciation – The Tribute to the Stars – was just the kind of party the CCEF presents with such panache. Sony Pictures Entertainment played host on May 2, 2015 (in addition to sponsoring the ‘Teacher of the Year’ award, ) and the crowd at the Cary Grant Theater was treated to wine and cheese presented by Akasha. The music of the AVPA Jazz Band (currently the signature sound of any event in Culver City worth attending; do those kids ever take a day off?)  kept things sparkling as the crowd swept into attend the awards ceremony inside.

The honorees were Teacher of the Year Kelly Roberts from Farragut Elementary, the Rotary Club Classified Employee of the Year Debbie Hamme of El Rincon Elementary, and the Rachlin Parners Superintendents Award was shared by Culver City staff Director of Public Works Charles Herbertson and Traffic Engineering Manager Gabe Garcia, both of whom have worked with the district on everything from biodegradable lunch trays to Safe Routes to School grants.

The newly permanent Principal of Culver City High School, Dr. Lisa Cooper was the Belkin/MACCS Employee of the Year, and effusively thanked her staff and the district for giving her the position. The winner of the Shining Star Award was long time volunteer Lise Friedman, who was congratulated on 30 years of work on every possible committee for the district, and her fame for ‘starting a meeting on time, and ending on time.’

The live auction, which offered some spectacular packages of food and travel, was called by enthusiastic professional auctioneer Mark Schustrin, who kept things moving while calling our encouragement and bidding card numbers.

Once the ‘street party’ began, the honorees and all their fans got to sample the fares of some of Culver 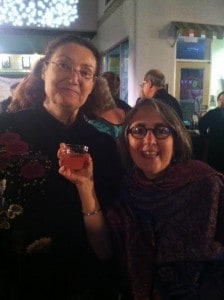 The great 80’s cover band REwind kept the dance floor filled with happy revelers (like Honoree Lise Friedman and CCEF President Judy Blake, pictured right) and the silent auction had bidders checking in and checking back on some great prizes.

Major applause for all those at the CCEF board who worked so hard to create such a terrific evening, and all the volunteers and staff who put in their best every day to insure such great schools.