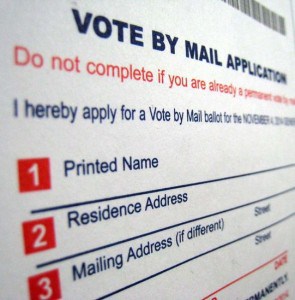 City Clerk Holly L. Wolcott would like to remind voters of important dates pertaining to the Vote-By-Mail (VBM) process for the 2015 Primary Nominating Election to be held on March 3, 2015.

California State law gives all registered voters the option to vote by mail regardless of whether or not they anticipate being “absent” on Election Day. A voter who is not currently a permanent VBM voter must submit an application in order to receive a VBM ballot for each election.

Applications for a VBM ballot can be found on the back cover of the Official Sample Ballot, which is mailed to all registered voters. Applications are also available on the Election Division website in English and the following languages: Armenian, Chinese, Farsi, Hindi, Japanese, Korean, Russian, Spanish, Tagalog, Thai, and Vietnamese.