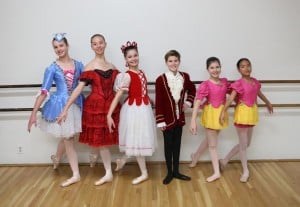 Now in its 5th decade of performances, Westside Ballet of Santa Monica, with live music by Santa Monica College Symphony, returns to present its holiday classic, The Nutcracker. After selling out the 2013 inaugural performances at the Broad Stage at SMC Performing Arts Center, the company announced today its 2014 return to the Broad will include additional performances. A total of nine presentations are set for December 13-21.

The Culver City crew adds a great component to the popular production with half a dozen dancers in the company (pictured above from left to right, Chiara Davis, Toscana Finke, Maisie Vargas, Max Vargas, Maddie Vargas and Lynn Kataoka.)

Martine Harley, Westside Ballet of Santa Monica Artistic Director says, “Last year was our first Nutcracker season at the Broad and it was an enormous success. We are proud to partner with them once again, offering the community a chance to see the world’s most beloved ballet, which endures as an unforgettable holiday experience for the entire family.”

Westside Ballet’s The Nutcracker tells the story of Clara, a young girl who receives a Nutcracker for Christmas before being transported to The Kingdom of Sweets where she is entertained by dancing candies and childhood fantasy characters come-to-life.

Based on E.T.A. Hoffmann’s “The Nutcracker and the Mouse King” and the Marius Petipa 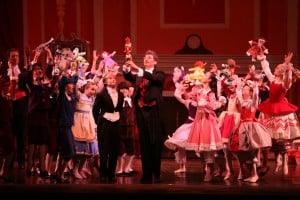 classic, Westside’s rendition is the complete, traditional ballet, from the Victorian-style party scene to the glittering Sugar Plum Fairy.

Special effects include a growing Christmas tree, a firing cannon, and falling snow.

As featured in the Los Angeles Times, the artistic direction captures the spirit of the legendary George Balanchine, passed on by Westside’s founder, Yvonne Mounsey, who created the Nutcracker role of Center Spanish during the peak of her career as principal dancer with New York City Ballet.

Westside Ballet is proud to announce that three Westside alumnae will alternate as Sugar Plum Fairy with members of Westside’s current company; Joy Womack, in 2012, became the first American woman to be invited to dance under contract with the Bolshoi Ballet Theater. Today she is principal dancer at the Kremlin Ballet Theater in Moscow, Russia. Lyrica Blankfein, a 2014 Mae L. Wien Award recipient, recently completed her studies at the prestigious School of American Ballet and is currently performing in Susan Stroman’s Little Dancer on Broadway. Lucia Connolly, who grew up performing in Westside’s Nutcrackers, is now studying at The School of American Ballet on a full scholarship.

Also visiting and appearing as Her Cavalier is Luke Willis, formerly with San Francisco Ballet.

For the second year in a row, approximately one thousand 5th grade students in the Santa Monica-Malibu Unified School District will be treated to a private, abbreviated, presentation of the Nutcracker held on Friday, December 12th and Friday, December 19th. Children will hear a narrated version of the Nutcracker story and see excerpts from the ballet followed by Q&A with the dancers.