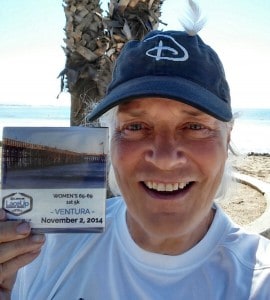 I’ve been intentionally in shape three times in my adult life, and running was part of all three.

Number One was when my sister-in-law Janet shared The Book of Running by Jim Fixx. She knew farmers don’t get as much exercise as you’d imagine and urged us to try it.

The next day my husband and I burst through the front door, clattered down the porch steps and crunched onto the gravel drive, arms pumping to the theme from Rocky. We turned onto the gravel road and got maybe 30 yards before stumbling to a stop, doubled over, tears streaming and blurring our vision, desperately coughing out carbon dioxide and sucking in oxygen.

And no, we hadn’t read book before we started.

I kept going for a while. My dad had been a runner back when nobody was. I grew up thinking it was normal to have a home gym, so it seemed natural to get back in shape by running after having two babies.

I decided to run to my friend’s farm, about 4 miles away. I spent the fall waving at the school bus as it roared by me; hoping I wasn’t embarrassing my boys. I finally made it to my friend’s home, where she served me coffee and we gossiped happily.

That was the last time I ran to her house–or anywhere. I’d reached my goal and had no thoughts after that.

Number Two was decades later: post kids, post Canada and post marriage. It began with my fear of spoiling my party by dying in the Grand Canyon on my 60th birthday trip with both boys and their ladies. Fear got me hill climbing in San Francisco’s North Bay. I jogged to a hill that never got any less steep, then added another, the specter of the Canyon flogging me on.

It got me the fittest I’d ever been and I didn’t die, didn’t hold the kids back and bounced up that spectacular mile-deep hole as easily as down. A once-in-a-lifetime thrill and I felt great, looked great, was in great shape.

I hadn’t gotten any smarter by getting older, and if this is starting to sound like diets you have known, you’re getting the point.

Number Three started when I came to Los Angeles and hated how out of shape I was. I joined the Y and worked the gym circuit, yoga, Zumba and treadmills faithfully for more than a year. One day I passed my son Jade, who does free weights on our patio, and noticed he was breathing hard and sweating. I asked him if I was supposed to breathe hard and sweat. He took a deep, patient, breath and explained the way to build muscles is by breaking them down with hard exertions, then letting them rest to rebuild stronger.

So I boosted the weight levels at the Y and started sweating and breathing hard.

Then Jade casually said, “You know, Mom, you could jog to the Y. Slowly.”

And there it was: running. Again. To get fit.

But first, the pain. I left the house the first morning with the theme from Rocky in my brain and made it through the short alley to the next block before pulling up, heaving for breath. I restarted so slowly, I think walkers passed me.

The day I made it non-stop to the Y, I felt so good, I jogged home. Part way. Then I made it to Ballona Creek. I found a jogging track that goes all the way to the ocean. Goals simply appear without looking for them. I am Forest Gump: I just feel like running.

I’m not stopping this time. I like being fit. I can squat easily, jog for miles, fit in clothes and not jiggle and wobble and pant. Skin, hair, brain, all glow and shine and process from the steady flow of oxygen and energy-boosting hormones. I sleep better.

I found a website for the Lexus LaceUp Running Series. They were asking for ambassadors and accepted me. Which is how I found myself in a 5k run in Ventura on the beach just as the sun broke over the horizon two weeks ago.

I tripped on the sidewalk on my way to the starting line, but I was so pumped, I started at the back of the pack anyway, prepared to stop if the bloody knee gave me trouble. Then I passed some walkers. They jogged past me and slowed to a walk. I leapjogged past them. I could do this. The knee and achy hand kept me slow and steady.

I thought about quitting, but never quite did. I would pick a spot and tell myself if I got that far, I could quit. Then I’d pass it and pick another one. When we turned for the last two and a half ks, I got my second wind. I poured water on my knee to unstick the blood and it felt wonderful. I got an energy drink and that felt wonderful. I found my rhythm as the finish line came closer and that was wonderful. I got a bit of applause when they announced my age. That felt gratuitous.

Who knows how far I’ll run for my 70th next year. One son is an Ironman participant and the other  has  done the LA marathon. The ladies also run, we’ll all run our own distances and then we’ll party

Thanks for the legacy, Dad. It’s a good one, including your 7-year-old great granddaughter Lauren.

And as I was waiting in a food line at the finish, I heard my name over the loudspeaker. Seems I’d won my age group. I think I may have been the only one in my age group, but I was running against myself, anyway. And I won.

And this time, I won’t quit.