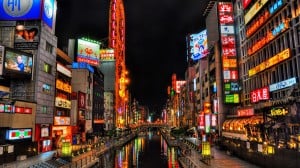 I’ve loved Japan since I was ten years old. With no Japanese heritage whatsoever, I was attracted by the culture since that time, and still love it. From the 1980’s through the 1990’s, I was briefly joined by others who saw Japan as a significant player on the global scene. Into the new millennium, they wanted to learn the language.

People wanted to “do business” with Japan. Many Japanese nationals had seized opportunities to emigrate abroad through the ’80’s, and, all of a sudden, folks had Japanese “relatives.” There were also Japanese-Americans wanting to return to roots, as well as other Asian-Americans, to whom Japanese seemed an approachable enough second language to master. Finally, there were young adults in love with “anime.” All of these sorts could make up a roster of students for a class.

And I was in the right place at the right time. I began teaching Japanese classes for Culver City Adult School as the century turned, fourteen years ago. Foreign language study, however, in general has gone the route of my other career (travel business) in terms of the availability and desirability of online self-determination options. At least here in Los Angeles, some have, sadly, turned away from their heretofore interest in Japanese culture.

Those who studied Japanese for purely mercantile purposes think Chinese is the better option. Korean now answers the call of relatives, roots and pop culture. I also maintain that there are some irrational biases against poor Japan lately. Just when a place has experienced hardships, a “kick ’em when they’re down” spirit tends to get unleashed. From Japan’s recent economic downturn, to their tsunami related woes, Japan’s entirely unique offerings to the world are brushed aside amidst worries of “radiation.” There have literally been objections to the Olympics being held there in 2020! In spite of all this, I submit that Japan’s gifts to mankind alone warrant focus on the study of its language and culture.

Japan presented the first “novel” to the world literature scene. When writing was being used elsewhere on the globe for political and/or religious purposes, Lady Murasaki Shikibu wrote The Tale of Genji, a fictional account of court life in Kyoto. Japan’s contributions to the arts and letters scene since that time have also been remarkable: for one, creation of a syllabary to transcribe the Japanese language that portrays universal linguistic rules. As I learned through my Linguistics training, the sounds “K” and “G” are basically the same; distinguished only by “voicing” humans can do with their throat. It therefore makes total sense that in the hiragana and katakana syllabaries, the ka (か) and ga (が) are written with the same character and a slight modification to denote the “voicing,” which looks like half of a set of quotation marks.

All this not to mention haiku, the ubiquitous 17-syllable (because Japanese is a syllabic, as opposed to “spelled”) language, three-lined poetry form. Haiku is wrapped up in the Japanese cultural belief that less is more. The beauty of expressing a fleeting moment in time in an exact, proscribed, and minimalist form is one of Japan’s major contributions to the world. Haiku in translation can be beautiful, but tends not to be even close to the original. Haiku translated comes in three flavors: a direct translation that aims to convey the original meaning (no matter what length or form the translation adopts), an adapted translation that comes as close to the meaning as possible while preserving the 5-7-5 syllable, three-lined structure of Japanese haiku rules, or, the most heinous, translations that attempt to rhyme, as if all English language poetry has to rhyme.

The Japanese have also contributed to the world culinary scene, from tempura (an originally Portuguese invention that arrived in Japan in the 16th century) to teriyaki (a minor food preparation style), but I would argue that sushi is Japan’s most unique addition. I have encountered sushi, in some form, in the most unlikely places around the world. Most remarkably, sushi was served at the pier restaurant in Caesarea, Israel, overlooking the Mediterranean and Roman amphitheater ruins. It had an odd twist, however; several of the sushi selections were topped with a piece of cooked sweet potato on top! We were told, “that’s how they do it here.” You know your cultural contribution has really “arrived” when modifications can be made, and the entry localized. Not to mention the presence of green tea everywhere.

Japanese fashion has also been iconic. From the Japanese blue and white geometric patterned color schemes to flower prints in black, or red, or gold, or all of the above and more, to the concept of buttonless jackets. Japanese style is immediately recognizable. Japanese clothing, whether it be a kimono or what are known as “happi coats,” generally ties with some kind of sash, as opposed to a button or a zipper or a belt. The common flip-flop came from the Japanese “zoori.” Japanese fashion designers like Issei Miyake, Yohji Yamamoto and others gained international prominence, while clothing stores like Unikuro (made in China to Japanese quality standards) and SuperDry (British design with a Japanese flair), become increasingly ubiquitous abroad.

So many Japanese innovations, from woodblock prints to the martial arts like karate, kendo, judo, jujitsu and aikido, to horticulture are now embedded in western and other cultures that we forget they came from Japan. Karaoke (incorrectly pronounced “carry-okie”), the popular pastime of singing along to lyric-less tunes in a bar, is also Japanese. Kara (から), which is the same “kara” (empty) in “Karate” (which means “empty hand”) plus “oke” (オケ) which is short for orchestra, means empty orchestra (supplying the words by singing along). And Japan’s theatre brought us: Kabuki, Noh, Kyogen, Bunraku.
Japan, often accused of being better at mimicry than innovation, has a unique history as a secluded island nation which yielded a time capsule of culture worthy of adoration.