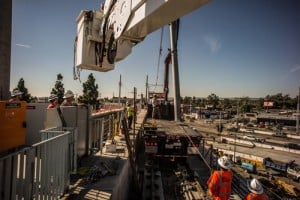 The race toward completion of the Expo Line light rail springs forward with the beginning of work to join the electrical and communications systems for Expo Phases I (Downtown to Culver City) and II (CC to Santa Monica) near the Culver City station. According to Bianca Barragan at LA Curbed the tracks were joined together about five months ago.

As seen in photos from The Source, while the tie-in itself might not be visually dramatic, one instantly noticeable change is the disappearance of the bulky bumper and pole that used to block the tracks at the end of the line.

Though there’s a clean line of sight between both phases of track near the Culver City Station, the trains won’t follow the tracks to Santa Monica until late 2015, when testing begins; Metro hopes to open the line to the public in the first half of 2016. The tie-in began last weekend and is expected to be totally finished by this weekend, with traffic unaffected by the work, says Metro.