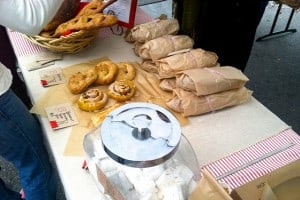 The popular socially conscious bakery will wrap up their farmers market operations on November 26.

After a breakthrough year in 2013, Red Bread, which shuttered its Culver City operation earlier this year to look for a larger space in Santa Monica, is now planning to debut its bakery and cafe in 2016. It’s going to be a long wait for fans of the socially-conscious bakery, which touts social justice and sustainable ingredients. Sadly, their Santa Monica location fell through at lease negotiations. According to the site Eater, their new location hasn’t been announced at this time, though a Westside spot is likely.

Owner Rose Lawrence tells the LA Times that in order to focus on the new space, they will also be shutting down their popular farmers markets operations, which take place in Santa Monica on Wednesdays and Mar Vista on Sundays. The last day to get Red Bread for over a year will be on November 26.

In the meantime, fans can receive their baked items from Good Eggs, a delivery service based in Lincoln Heights that will send prepared and frozen items to homes across town.

In addition, the LA Times reports that Red Bread will conduct a pop-up at Elysian in January.