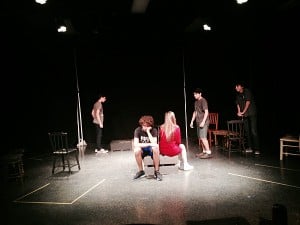 Anton Chekhov’s groundbreaking masterpiece The Seagull will open the 2014-15 season of AVPA’s Blurred Vision Theater Company. AVPA creative director of theater Jill Novick directs a strong ensemble cast of high-school theater students in the 1895 play, which follows 12 diverse characters, each deeply dissatisfied with his or her life, through a series of encounters at a Russian country estate.

The Seagull is generally considered to be the first of his four major plays. It dramatises the romantic and artistic conflicts between four characters: the famous story writer Boris Trigorin, the ingenue Nina, the fading actress Irina Arkadina, and her son the playwright Konstantin Tréplev.

Though the character of Trigorin is considered Chekhov’s greatest male role, like Chekhov’s other full-length plays, The Seagull relies upon a cast of diverse, fully developed characters.  Characters tend to speak in ways that skirt around issues rather than addressing them directly; in other words, their lines are full of what is known in dramatic practice as subtext – the story behind the story, text that is not spoken aloud.

General admission $15; Seniors and children $10. Purchase tickets in advance on Eventbrite.com; a limited number of tickets will be available at the box office 30 minutes prior to each performance.