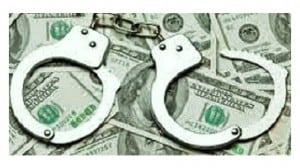 Nolan Mitchell Ransdell, 41, of Canyon Country was sentenced by U.S. District Judge George Wu, who ordered Ransdell to pay about $2.5 million in restitution. Ransdell previously pleaded guilty to bank fraud and admitted that he stole money from his employer, Studio Lambert USA, which is now known as All3Media America.

Ransdell embezzled the money in several ways, including forging an executive’s signature on checks he made out to himself. He also took checks that the executive had pre-signed for “emergency” use and made himself the payee. In addition, Ransdell made checks payable to a subordinate, and then instructed that employee to cash the checks and return the money to him.

Studio Lambert USA, a subsidiary of a British studio, produced television shows for distribution in the United States, including “Undercover Boss.”