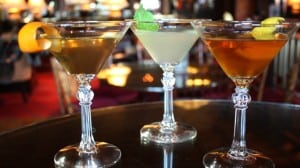 The Culver Hotel wasn’t just the place to be in Culver City on September 6, it was the place to be for all of Los Angeles. The first clue came when we were riding the elevator up from the garage at City Hall. Our 1920’s clothing gave us away to the other passengers, who remarked, “Oh, wow, we know where you’re going!”

Arriving at the red carpet, we were surprised by the Lollipop League, and the delightful Lawrence Moore, greeting guests. Once 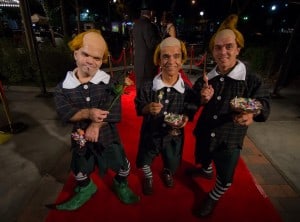 inside, we were handed a glass of an astonishing pink concoction of chocolate cherry rum, and all prohibitions were officially off. It was, as promised by the incomparable host Seth Horowitz, an evening of mirth, mayhem, merriment and more,

Music in the Grand Lobby from the Modern Cocktail Society was as up tempo as the arriving guests, with one great beaded dress after another, charming men in fedoras and spats, and feathers seemingly everywhere. The staff was flawless, offering spicy sweet hors d’oeuvres of chicken, anchovies and roasted red peppers on toast points along with a rich and delicious pate mousse to keep the drinks company. An ongoing show of photos from the history of the hotel included Charlie Chaplin posing with a Little Tramp doll, Vivien Leigh and Clark Gable wrapped in a GWTW kiss, John Wayne posing with a Stetson and a cowboy kerchief, and many different portraits of Harry Culver.

It was a moment in time to sit in the beautifully appointed lobby and soak in the idea that Charlie, Vivien, Clark and John had all once sat in this same space, perhaps talking about the same things; movies, books, city affairs, children and change. If these walls could talk, they would have many sparkling tales to tell. 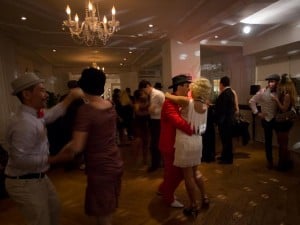 On the second floor the fun continued with a trio playing old-school swing, and a dance floor filled with couples keeping a good rhythm to the jazz.

A photo booth room offered a ‘flipbook’ to memorialize six seconds of whatever silliness you might want to immortalize, and right around the corner was another secret bar dispensing Prohibition Punch. While the bartender admitted that no one in the US really drank vodka until the 1950’s, it was the main ingredient in the cocktail, along with orange curacao and Champagne. Not historically correct, but very tasty. This was accompanied by bite-sized lamb chops in a tamarind and ginger sauce, and petite ramikins of lobster stew, scented with thyme and pepper.

There was a cigar lounge, a blackjack table and when the big moment arrived, a cake. With a 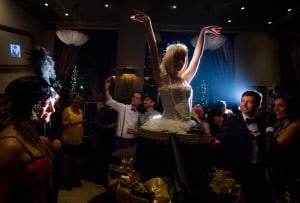 great chorus of ‘Happy Birthday’ from guests, a woman popped out of the cake to cheers and whistles. (I’d bet that hasn’t happened at the Culver Hotel anytime in this century.) Like the appetizers and the drinks, the cake was top notch, a gorgeous chocolate with a moist crumb, with a strawberries and cream filling, and a perfect white buttercream frosting.

The crowd seemed to contain every diverse element of the local population, from the city officials to the movie makers, the royalty of the restaurant trade, the householders and stakeholders that have been the mainstay of Harry Culver’s vision. Being dressed for a party that Harry could have hosted made it all seem even more special, while the pinstriped suits danced the Charleston and beaded headbands glittered.

Kudos to Seth Horowitz, the terrific staff, the wonderful kitchen, and all the movie star memories. May the next 90 years be as much fun as the anniversary party.

If you want to know where to go downtown for a bite and a drink, there’s this fabulous little bar on the second floor of the Culver Hotel that has a view of the city that seems to reach through time. Don’t miss it.