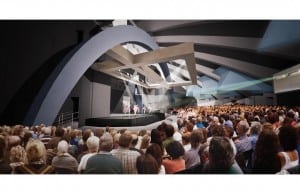 The first meeting of the Culver City School Board for the school year of 2014-2015  saw the long anticipated presentation by the architects Craig Hodgetts and Ming Fung on renovating the Robert Frost Auditorium at Culver City High School. Hodgetts presented, speaking with the flair and enthusiasm of an architect with an engagingly difficult task ahead, and narrated a series of slides showing what the completed Frost could look like.

“We discovered that the Frost was quite a celebrity in it’s day,” Hodgetts began, “there are photos in the Getty archive by the very noted photographer Julius Shulman showing the Frost when it first opened, and it was, in fact, nationally famous. This is an incredible landmark and something that deserves our care and attention.”

Breaking the project into three sections; air, shop and performance space, Hodgetts noted that air quality – the heating and air conditioning system – was the most in need of upgrading. Showing how the current system could be replaced with an innovative air system, clearing out space for more renovation in the upper portion of the building, he explained the proposed new system as a bonus.

“The air units will be outside on the periphery, coming through the roof, ventilating the 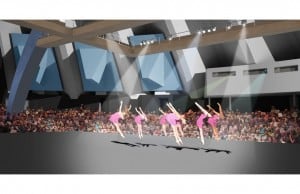 audience seating. We kinda get a ‘two fer’ as they will be made out of a sound absorbing material that will aid the acoustics, and give us a colorful sail – like element which, with lighting , can make the space colorful. Each unit will be independent of the others, so for servicing they can be addressed individually.”(See illustration, right)

Hodgetts continued, “The back of house can be opened up. By changing the air, we create space above the shop, and we can bring the restrooms downstairs and create a two story black-box space. Reconfiguring the back stage can expand the space of the shop and enclose the loading dock to create more space.” He observed that the current upstairs restrooms were not ADA complaint, meaning that handicapped performers were without facilities. 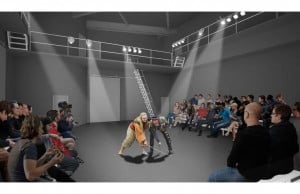 Replacing the current small, triangular space of the black-box theater with a two story black-box with a catwalk, which could convert to a classroom, using removable bleachers for seating would make it a simple transition from theater to classroom. (See illustration, left)

Hodgetts concluded his presentation with addressing the main stage area, observing that “this is the difficult part; the unique shape of the building. Putting in a new overhanging arch, and a catwalk grid will create more space for the musicians in the pit. (See illustration at the top of the article)

Dr.Tony Spano, co-director of the AVPA, spoke to the board noting that “The designs are amazing but it’s the practicality that really will serve us.”

Board member Sue Robins asked about the time frame for the project, “When do we begin? When can we plan on concluding?”

Hodgetts replied “We could have a permit by the end of February – Theoretically, this is an ‘a la cart menu’ – if you authorize all three, they could be accomplished simultaneously, depending on funding.”

Board member Steve Levin wanted to know “How much uncertainty is there over how much it’s really going to cost?”

Hodgetts noted that the design process had made great effort to contain the cost, going through a number of engineering and design re-calculations. “We went through several iterations just trying to reduce the amount of steel used, and we we able to cut it in half from our original calculation.”

Superintendent Dave La Rose addressed the issue, saying “We have identified the three tasks – air, acoustics and aesthetics – we also have a responsibility to student performance and service, and  we want to address that need as soon as possible, so we are looking at moving ahead aggressively.”

Illustrations courtesy of Hodgetts and Fung