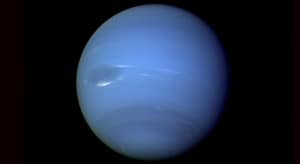 NASA’s Pluto-bound New Horizons spacecraft has traversed the orbit of Neptune. It is due to make a close encounter with distant Pluto on July 14, 2015.

The sophisticated piano-sized spacecraft, which launched in January 2006, reached Neptune’s orbit on Aug. 25, 2014, in a record eight years and eight months. New Horizons’ milestone matches precisely the 25th anniversary of the historic encounter of NASA’s Voyager 2 spacecraft with Neptune on Aug. 25, 1989.

“It’s a cosmic coincidence that connects one of NASA’s iconic past outer solar system explorers with our next outer solar system explorer,” said Jim Green, director of NASA’s Planetary Science Division. “Exactly 25 years ago at Neptune, Voyager 2 delivered our ‘first’ look at an unexplored planet. Now it will be New Horizons’ turn to reveal the unexplored Pluto and its moons in stunning detail next summer on its way into the vast outer reaches of the solar system.” 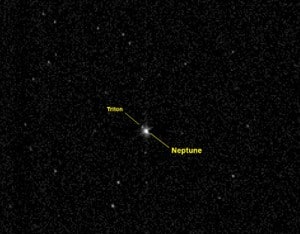 Several senior members of the New Horizons science team were young members of Voyager’s science team in 1989. Many remember how Voyager 2’s approach-images of Neptune and its planet-sized moon Triton fueled anticipation of the discoveries to come.

“The feeling 25 years ago was that this was really cool, because we’re going to see Neptune and Triton up-close for the first time,” said Ralph McNutt of the Johns Hopkins University Applied Physics Laboratory (APL) in Laurel, Md., who leads the New Horizons energetic-particle investigation and served on the Voyager plasma-analysis team. “The same is happening for New Horizons.”

Voyager’s visit to the Neptune system revealed previously unseen features of Neptune itself, such as the Great Dark Spot, a massive storm similar to, but not as long-lived, as Jupiter’s Great Red Spot. Voyager also, for the first time, captured clear images of the ice giant’s ring system, too faint to be clearly viewed from Earth. “There were surprises at Neptune and there were surprises at Triton,” said Ed Stone, Voyager’s long-standing project scientist from Caltech. “I’m sure that will continue at Pluto.”

Many researchers feel the 1989 Neptune flyby—Voyager’s final planetary encounter—might have offered a preview of what’s to come next summer. Scientists suggest that Triton, with its icy surface, bright poles, varied terrain and cryo-volcanoes, is a Pluto-like object that Neptune pulled into orbit.

“There is a lot of speculation over whether Pluto will look like Triton, and how well they’ll match up,” McNutt said. “That’s the great thing about first-time encounters like this—we don’t know exactly what we’ll see, but we know from decades of experience in first-time exploration of new planets that we will be very surprised.”

Similar to Voyager 1 and 2, New Horizons also is on a path toward potential discoveries in the Kuiper Belt—a disc-shaped region of icy objects past the orbit of Neptune—as well as other unexplored realms of the outer solar system and beyond.