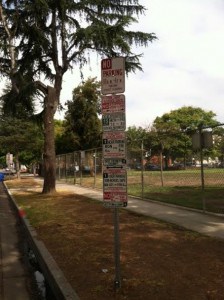 When the word got out last Friday that the tallest parking sign ever seen had sprouted on Irving Place, it went viral – there were photos of the thing on half a dozen sites, and stories on several local news channels. Culver City residents were asking each other “Is this the kind of fame we like?”

Mayor Meghan Sahli-Wells said no, and got the signs pulled before Friday was over, and replaced with signs that were about one-third as tall.

“I saw the signs, and we have a great new program designed to help with drop-offs for the [Linwood E. Howe Elementary] school. The communication problem was that wanting to let the parents know what was going on seemed to create the need for this very tall sign, and rather than get people info on the student valet, what what we were communicating was that there are too many signs.”

With the city and the school district working together in the hopes of making it easier for the residents of Irving Place and the parents dropping children off at school, an absurdly tall parking sign was created as a temporary guide with more information on it than anyone could process in the moment of driving past it. But it was even more temporary than planned.

In less than 24 hours, the signs had been taken down and replaced by the shorter and far less confusing version pictured above.

“My focus is on getting kids out of cars, ” continued Sahli-Wells, “but I also understand that can’t work for everyone. So, we created this program to make it easier and safer for parents who need to drive their children to school.”

School Superintendent Dave LaRose was on site, directing traffic and helping out. He offered his thoughts on the situation, saying “The routine will take some time, but I believe that everyone recognizes the vision is to enhance student safety, and increase school and district office parking during the day. Our team was out in full force to welcome parents, coach them on our new “valet’ service and monitor safety.”

With school opening this morning, the first day of the ‘student valet’ program was deemed to be successful, and the new, shorter signs helped.