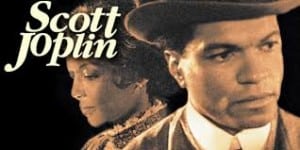 Black Talkies on Parade begins a two month celebration of ragtime with a screening of the film Scott Joplin. Directed by Jeremy Kagan, this 1977 bio-pic stars Billy Dee Williams and features Clifton Davies, Art Carney and music legend Eubie Blake. The film tells the story of Joplin also known as the “King of Ragtime.” Joplin composed many of the genre’s greatest hits including the Maple Leaf Rag and The Entertainer and helped bring ragtime to a wider audience. Scott Joplin won an award from the Writers Guild of America in 1979 and contains many of the hit songs Joplin wrote. The afternoon will also feature a discussion with film historian Les Wills and an introduction by Lloyd Clayton. Enjoy the story of one of America’s greatest composers and join us next month for a special ragtime presentation by historian and composer Galen Wilkes followed by the return of silent film musician Cliff Retallick.