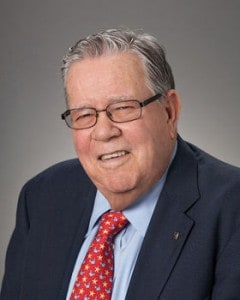 Edward C. Little passed away on Saturday, August 16, 2014. In addition to his local auto repair shop on Sepulveda Boulevard, and his service to the City of Culver City on the council, one of Little’s most noteworthy achievements was his leadership on the West Basin Water District. His focus on diversifying West Basin’s water portfolio following the Southern California drought in the late 1980s and early 1990s was a tremendous benefit to the region. Little, more commonly known as “Ed,” led the Board effort to begin both wastewater recycling and water conservation as additional sources of locally-controlled water.

“We are extremely thankful for Ed Little’s dedication, vision and leadership in the water community and at West Basin. He was a true friend and will be greatly missed. His contributions to Southern California’s water reliability through West Basin and Metropolitan Water District of Southern California (MWD) will live on for decades and decades to come,” said Donald L. Dear, President of the West Basin Board of Directors.

Recognizing his efforts, the West Basin Board of Directors in 2007 renamed its water recycling facility the Edward C. Little Water Recycling Facility in honor of his dedication to West Basin and its constituents. The facility is the largest of its kind in the world and is one of six recycling centers in the world designated by the National Water Research Institute as a National Center for Water Treatment Technologies.

His daughter, Patti Grammatis said her father was “dedicated to service with honesty and integrity above and beyond. His life was really about making sure that Southern California had good water and he was involved in so many service organizations. We will really miss him.”

Little’s long-term vision has also contributed to the research and development of ocean-water desalination through the operation of a pilot plant in El Segundo and a full-scale Temporary Desalination Demonstration facility in Redondo Beach, Calif.

Little’s involvement in water began in 1954 working on the election to annex Culver City to West Basin and in the 1960s serving on the County Water Resources and Reclamation Advisory Commission with two other water industry icons, Joe Jensen and William Farquhar.

Ed Little was appointed to the West Basin Board of Directors in 1989 and retired just prior to completing his fifth term of office. He represented Division IV which includes the cities of Culver City, El Segundo, Malibu, West Hollywood and the unincorporated areas of Lennox, North Ladera Heights, Del Aire, Topanga, View Park and Windsor Hills.

Close friend Carl Haglund, a retired public relations specialist who worked on Little’s re-election campaigns, spoke highly of him both personally and professionally.

“He was probably the most honest, candid, straightforward person that I’ve known in that type of a position,” he said.

Little also served as one of West Basin’s representatives to the MWD Board of Directors for 14 years. During his MWD tenure the agency developed and constructed some of the most historic water projects in Southern California including the Diamond Valley Lake reservoir, the Inland Feeder Project and the Quantification Settlement on the Colorado River.

Little owned and operated the Ed Little Auto Service in Culver City since 1951, which is still in operation today. In 1992, the Ed Little Auto Service was recognized by the Culver City Chamber of Commerce as one of the three outstanding businesses in Culver City. He was also a former Culver City councilman. Little was a native of Los Angeles and served in the Navy during World War II. After the war, he attended the University of Southern California and graduated in 1950 with a Bachelor of Science degree in Industrial Management.

The family is planning a memorial service and has requested that any donations in Little’s memory be made to the Alzheimer’s Foundation of America.