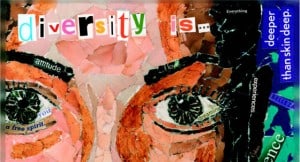 The warm summer afternoon of August 17 , 2014 saw the Robert Frost Auditorium filled with some very well known actors espousing an important cause – diversity in media. The Spotlight on Diversity offered music from the Gay Freedom Band, a panel discussion, and a keynote address from Amelia, a star columnist from the Huffington Post’s Gay Voices.

Co-sponsored by the AVPA, The Box Scene Project and BAYCAT, the event started off with some rousing music from the Gay Freedom Band, and then seated a panel to discusss diversity in media. Moderated by Professor Russell Robinson of the UC Berkeley Law School , panelists included Dylan Marron, Crissle West, and Jasika Nicole  (from the popular podcast Welcome to Night Vale,) Julie Vu (noted trangender YouTube performer) and Amy Fox from Trembling Void Productions, (now creating The Switch) Sean Maher (most notably from the cult favorite TV show Firefly) and the groundbreaking Lea DeLaria, now onscreen in Orange is the New Black, but famous in Los Angeles for decades as a successful stand-up comic and jazz vocalist.

The panel took their task seriously, discussing the dearth of women, gay and minority characters in mainstream media, the need for all people to be able to see themselves represented and feel a part of the ongoing cultural dialogue. With Professor Robinson using Elle DeGeneres’ coming out on tv as a point of reference, most of the panelists had memories of what that moment felt like for them. DeLaria offered that she had been out long before that, but that it did open a door in prime-time television that many expected would never open.

When Amelia accepted her award as the honoree, she also focused on a moment in time that turned the tide – Whoopi Goldberg’s story of seeing Nichelle Nichols on the Starship Enterprise, and rejoicing that there was a black woman on tv who was not the maid. “At that moment,” Goldberg was quoted as saying,  “I knew I could be anything.” Amelia’s oldest son, who ‘came out’ to his parents as a six year old, was the center of the controversy that put Amelia into the limelight as a parenting blogger, defending her child’s right to be himself. “If it were not for those boys on Glee, he might not have had the chance to see – and recognize- himself in a way that he loved, in a way that felt right.”

Her pleas for support and acceptance for youth focused in with the theme of diversity, and the need for stories to be told that include people who feel they are outside. “Gay youth are eight times more likely to commit suicide, because as hard as it is to be a teenager, it’s a lot harder when you are told that you are wrong, and that you shouldn’t exist.” Amelia’s loving celebration of her son for being who he is has won her legions of fans, many of them people who did not have that kind of support in their families.

The event wrapped up with a stellar performance by Kim Tillman’s band Tragic Gadget doing a few songs from their EP Crane Song, and a bit of a Glee-fan dream with Dominic Barnes and Curt Mega (both from Glee) sharing a duet of “What You Own” from the musical RENT.

If you missed this event, and you feel that diversity is important, of course there are links to click and things you can do.

The Box Scene Project offers a scholarship of up to $10,000 for a financially needy and underrepresented student “to pursue their dream to create media that matters,” in addition to a fellowship of up to $5000 that includes mentoring and training to support upcoming projects. To donate, go to www.theboxsceneproject.org/

BAYCAT gives youth in San Francisico a place to learn, experiment and create the kind of media they want to see. Celebrating their 10th year, they asked the audience to ‘pledge their birthday” by donating to BAYCAT. Go to BAYCAT.org for more info on their program and their success stories.

You know where to find the AVPA – at Culver City High School, educating and training the world-class talent that can open media to everyone. Donate your funds, your skills, your time and your applause to www.AVPA.org.

Thanks to Dr. Tony Spano and Heather Moses for supporting an event that spoke about the need to tell all kinds of stories. The Robert Frost was filled with warm hopes, hot stars and just the right kind of spark to keep diversity cooking.