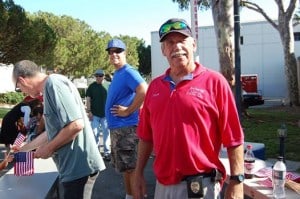 When I got a message about the sudden death of Rick Hudson, it took me a few moments to connect the name with the face. We weren’t friends, but the kind of folks who cross paths a few times a year because we were interested in the same things; civic life, schools, community. It was the suddenness of his end that people kept commenting on – “But I just saw him last week,” and “He seemed to be fine.” Death is sudden, and we often forget that it’s there – just around any corner, walking up to meet us on the next street.

Rick’s death leaves a very large hole in our community, because he gave so much time to Culver City. Chair of the Parks and Rec Commission, coaching at the high school, active in the Exchange Club, he wore a lot of hats. His kindness and compassion for the people around him lead him to wear all those hats, to make sure that the teams had a coach who cared for them, that the commission had a leader who was involved in the process. Rick wanted to know that if it was being done, it was being done right.

Laura Stuart, who served with Rick on the Parks and Rec Commission, offered ” Rick was a really fun guy to be around – he was a very positive person and had a ‘let’s get it done’ attitude. No matter the situation, he was always willing to step up. I remember one year on our annual Parks Tour that our driver didn’t show up so Rick, in his usual manner, stepped up and became the driver, showing us all around the city, including all his favorite shortcuts! We had quite the wild ride.

“At this year’s Culver City Exchange Club 4th of July fireworks show, Rick stood in the heat for four hours at the entrance, checking bags and coolers, to ensure the safety of the event, all the while joking and being his ever jolly self. Jolly is a good word to describe Rick, as he loved the PRCS Annual Tree Lighting, where he volunteered to be Santa’s elf, and later the jolliest Santa of all. He was so happy when he could make sure the kids were having the best time possible.”

Days later, the news of Robin Williams death was blanketing the media, and the tragedy of his death was the same story, writ larger. People spoke about the joy and the laughter that he had brought into the world, of the good times they had shared, of how kind he was, and how generous. He would be missed not just because of who he had been, but how he lived.

I had the thought that this is traditionally the stairway to sainthood; when you are alive, you do so much good that people remember the results. After you die, people still think of you as someone who can help. They remember what you did, they think of how you might take care of a problem.

While we don’t quite have the Shinto belief that our deceased are still present, watching over us, we have plenty of cultural custom with the same idea. While the blue genie and the cross-dressing nanny will be iconic around the world for many years to come, in Culver City there may be an extra effort at elvishness at our local tree lighting next year, or maybe some unexpectedly brilliant explosion on the fourth of July. Whoever steps up to coach the high school teams may find a bit of gentle guidance that just comes by on the breeze.

It might even come to us as an awareness of how limited our lives are, and to make the most of the time we have. When we open our hearts to our community, when we do all the good we can, we needn’t worry about what be walking up to meet us on the next street.

There will be a community memorial service for Rick Hudson on Saturday, August 16 at Bill Botts Field at 6:30 PM