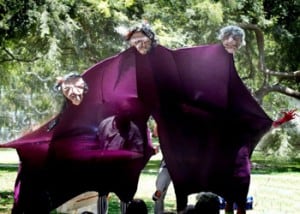 In this hyper-fun, hyper-family-friendly performance, Rogue Artists Ensemble takes Shakespeare’s best characters, poetry and plot devices and shuffles them up, twists them around, and shakes them down. Remixing Shakespeare with intricate mask work, original puppets and live music, the Rogues dig down to the heart of the Bard, sharing the joys, the sorrows and the non-stop action that everyone, from kids to Shakespeare aficionados, loves about the greatest playwright of all time.

“We’ve drawn on nearly twenty of Shakespeare’s plays, singing the text, manipulating it with computers, altering words into rhythmic music, even rapping text to a home-brewed beat box score,” says director Sean T. Cawelti. “The show is manic, musical, incredibly colorful and irreverent. We want to reinvigorate the Bard, to make him even more accessible for all ages.”

Rogue Artists Ensemble differs from other theater companies in that it’s run by a collective of multi-disciplinary artists and designers rather than by actors, writers or directors. By combining ancient storytelling techniques (music, dance, masks, puppetry) with modern technology (digital media, special effects and theatrical illusions), the Rogues cultivate a unique style of live performance unlike any other. They define the combined use of these and other underrepresented art forms as Hyper-theater. Since 2002, the Rogues have created over a dozen original new works and collaborated with hundreds of artists and community members.