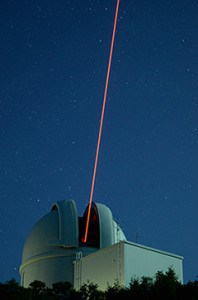 An international team, including Dr. Christoph Baranec of the University of Hawaii at Manoa’s Institute for Astronomy, is using the world’s first robotic laser adaptive optics system—Robo-AO—to explore thousands of exoplanet systems (planets around other stars) at resolutions approaching those of the Hubble Space Telescope.

Laser adaptive optics systems are used by terrestrial telescopes to remove the image-blurring effects of Earth’s turbulent atmosphere, thereby capturing much sharper images than are otherwise possible from the ground. Baranec, Robo-AO’s principal investigator and lead author of the Astrophysical Journal Letter, led the development of the innovative Robo-AO system on the Palomar 1.5-meter telescope. It is the world’s first instrument that fully automates the complex and often inefficient operation of laser adaptive optics.

“We’re using Robo-AO’s extreme efficiency to survey in exquisite detail all of the candidate exoplanet host stars that have been discovered by NASA’s Kepler mission,” said Baranec. “While Kepler has an unrivaled ability to discover exoplanets that pass between us and their host star, it comes at the price of reduced image quality, and that’s where Robo-AO excels.”

In fact, analysis of the first part of the Robo-AO/Kepler exoplanet host survey is already yielding surprising results. “We’re finding that ‘hot Jupiters’—rare giant exoplanets in tight orbits—are almost three times more likely to be found in wide binary star systems than other exoplanets, shedding light on how these exotic objects formed,” said Prof. Nicholas Law (University of North Carolina at Chapel Hill’s College of Arts and Sciences), Robo-AO’s project scientist and lead author on the Astrophysical Journal paper. “Going further, Robo-AO’s unique capabilities have allowed us to discover even rarer objects: binary star systems where each star has a Kepler-detected planetary system of its own. These systems will be uniquely interesting for studies of how the planets formed—and for science fiction about what life would be like with another planetary system right next door,” added Law.

“AUGUST MOON MOST BEAUTIFUL.” In the 1956 movie “The Teahouse of the August Moon,” the wise Okinawa elder tells the American soldiers, “All moons beautiful, but August moon most beautiful.”

I have always remembered that sentence, and over the years I have found there is something especially beautiful about the moon in August, perhaps because it is so often surrounded and framed by the altocumulus clouds that accompany the moist, monsoonal flow of air typical this time of year in Southern California.

This year’s August moon will be full on Sunday, August 10. Unfortunately, the full moon will brighten the sky and so interfere with seeing this year’s Perseid meteor shower, which will be at its peak on the nights of August 11 and 12.

Still, a few bright meteors may still be seen, and it’s well worth “looking up” for this, the best meteor shower of the year. Caused by left-over grains of dust from Comet Swift-Tuttle, this shower takes its name from the constellation Perseus, which is the part of the sky where the meteors seem to originate as they streak across the sky. The most meteors are usually seen after midnight, though I have seen a beautiful Perseid fireball as early as ten o’clock. Happy viewing!