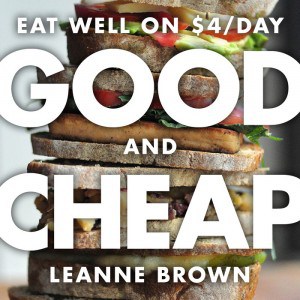 While living on ‘food stamps’ is undeniably difficult, a culinary genius has come to the rescue for people struggling to feed their families on four dollars a day. Good and Cheap by Leanne Brown is the best cookbook I have read in years, and it’s available as a free pdf download.  Brown is a Canadian who took her Masters in Food Studies at NYU, and this is her ever-so-practical thesis.

“I really believe in cooking,” says Brown, 29, in an interview with the Edmonton Journal. “That’s one of the big missing pieces of the food landscape. If we are trying to create a more just food society, people have to be able to cook.”

The title says it all. The collection of 132 pages combines healthy food with big flavor at a small price. It was developed as the thesis for Brown’s program, which she completed at the end of 2013, and is geared to the needs of people in the United States who qualify for food stamps and must live on a food budget of $4 a day.

These are low-income folk, and despite what many people think, Brown says some of them really know how to cook. It’s also true that others live on frozen microwave meals and potato chips. But Brown’s book works for both sides of the kitchen counter, offering a range of nutritious, and also luscious, dishes for every part of a meal, from entree to dessert.

Vegetables are prominent (Brown became a vegetarian at the age of 14) but there are also recipes for pulled pork, shrimp and grits and roast chicken. Plus chocolate chip coconut cookies.

Brown insists that cooking skill, not budget, is the key to unlocking great food.

“If you don’t learn at home, and you don’t learn at school, cooking can be intimidating to pick up on your own,” says Brown. “There is a whole language to it. How do you decide what to buy first? How do I create a pantry for myself? These things are difficult to do for the first time.”

Brown has released Good and Cheap, and its collection of growl-inducing photos, online for free, and anybody can download them. (Indeed, more than 100,000 people already have.) All Brown asks is that you credit her if you are using the recipes outside your own kitchen.

She has also launched a Kickstarter program to raise $10,000 to get hard copies of Good and Cheap into the hands of people who need it, especially people without computers. Through Kickstarter, buyers can obtain a copy of the cookbook for themselves, and also donate one at the same time to a person in the United States who could benefit from its guidance. Brown will ship books outside of the United States.

“I don’t want food to be something that people are worrying about. Food should be joy. But one of the things I wanted to do in Good and Cheap was to draw attention to issues of poverty and hunger. So much happening in the food movement is in the middle class, but there is a big group that’s left out of that. But everyone deserves the opportunity to experience the joy of a wonderful meal.”

Want to help fund hard copies for people who need them? Click on Kickstarter and chip in.

You might already have everything you need to serve a fantastic dinner for less than a dollar a plate.