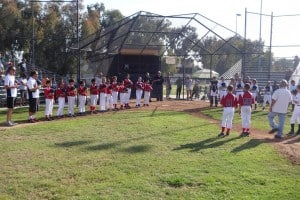 The Culver City Little League 9-10 year old All Star team started out with 14 boys of varying abilities.  The players came from two different levels and nine different teams.  They had previously experienced different coaching and demonstrated different skill sets.  Only four had ever participated in a Little League All Star tournament previously.  Their competition included nine other teams, most of which had been playing together for years.  The Culver City team had just three weeks to prepare.

The boys gave an incredible effort during those three weeks of practice.  Practicing baseball is not generally fun.  Yet, the boys were out there virtually every day for 21 consecutive days.  The team was fortunate to have Coach Chip Netzel, Coach Michael Netzel and Coach Brandy Peacock come out and work with them.  Coupled with Manager Henry Brandon and Coach Andrew Thomas, the boys had five extremely knowledgably coaches each with his or her own different techniques and coaching styles.  Culver City High School Coach Rick Prieto allowed the boys to use the high school field, giving the boys an incredible facility in which to hold practices.  The boys responded.  Each improved remarkably during the three week period.  Each became better teammate and friends, and each became better baseball players.

Culver City opened up with a 9-8 victory over a scrappy City of Angels team.  That game was the first experience for many of the boys seeing quality pitching, and the first time many of the boys saw a curve ball.  Culver City followed that game up with a resounding 20-4 spanking of Santa Monica West.  The Santa Monica game was tied 3-3 in the fifth inning before Culver City exploded for 17 runs in the fifth and sixth innings.  That victory put the Culver City squad in the semifinals of the winner’s bracket.  Culver City fell to Malibu, 7-2 in the semi final game, sending them to the “loser’s” bracket and a date with arch rival Beverly Hills.

Coming back from a loss, especially at this age, is difficult, but the team responded and annihilated Beverly Hills, 24-6 in just four innings.  This brought Culver City to an elimination game against rival West L.A.  West L.A. hit jumped out early and led 11-2 going into the sixth and final inning.  Demonstrating intestinal fortitude not often seen in players at this age, Culver City battled back, scoring eight runs and loading the bases with two outs.  A hard groundball to shortstop off the bat of Thomas Chee ended the game, with Culver City on the wrong side of an 11-10 final score.  The rally included a grand slam home run by starting pitcher Andy Perez, and hits by eight other Culver City players.

Culver City was led offensively during the tournament by second baseman Brandon Zeidman who hit .700, catcher Tommy Peacock (led the team in runs scored) and pitcher/catcher Andy Perez and centerfielder Stephan Thomas (co-leaders in RBI).  Every Culver City player got at least one hit and scored at least one run in what was truly a team effort as Culver City outscored its opponents 65-36 in the tournament.  Nine different players took the mound for Culver City, all with great success.  Zeidman, Jason Romero and Chee were credited with victories in the three wins.

Culver City ultimately finished fourth in the tournament and the boys’ season is now over.  However, the players grew not only as players, but as boys, and their “never give up attitude” demonstrates just how special these boys truly are.  The fourteen players on the 9-10 all star team are, alphabetically, Jared Bojorquez, Thomas Chee, Oliver Frye, TJ Keith, Diego Lopez, Leo Matsuoka, Tommy Peacock, Andy Perez, Jair Ramos, Jason Romero, Jesse Tanahara, Stephan Thomas, Travers Tobis and Brandon Zeidman.