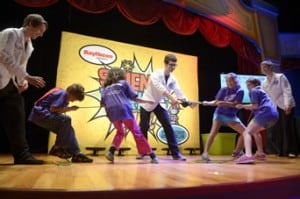 Raytheon in El Segundo hosted its 13th annual Engineer Games competition in which high school students were asked to solve a problem created and posed by Raytheon engineers. The project they were given to solve included building a “star tracker” that could be used for navigation. Ninety minutes was allotted for students to build a device that could remain aligned with a distant bright object (such as a star) no matter what orientation the craft (spaceship) was traveling in. The team that was able to obtain the most light on both sensors of the “star tracker” would win.

At first the challenge proved to be without success for the co-conspiring robotic teams of Milken and Culver City, as their attempts to shine light on both sensors didn’t work. Realizing that the baffle (a device, such as a wall or screen that is used to control the flow of light) was shadowing the other sensor, team members Chris Hernandez, Mario Gallardo, and Leilani Emelio went to work. Altering the location of the baffle by rotating the base proved to get the same result, unfortunately, as only one of the sensors remained lit.

After a few tries, the team figured out that the problem was due to the baffle’s constant swaying. Wrapping duct tape around the baffle proved to be their solution, as it heightened the baffle’s rigidity. This time, having the light hit both of the sensors perfectly, our home team managed to score around 4,000 points, beating the other three dozen robotics teams by a longshot!

Spoken by none other than the winning team captain from Culver City, Hernandez shares, “Conceptual ideas are nice and all but you won’t know until you test it, that it really works!” Let’s give our talented robotics team huge congratulations for bringing home a win to Culver City High School!