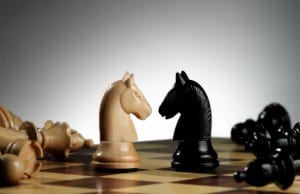 To Compete or Not Compete: that is the question —

Thanks to the efforts of a particular student and his generous parents, Culver City Middle School was able to enter the national Scripps Spelling Bee for the first time. He didn’t make it to the national level but, this student loves to compete. He also joined our 5th Annual Toby Rubenstein Memorial Chess Tournament. Spelling bees, contests and competitions go back to the earliest times in history, from jousting matches, to the Olympics themselves. Competition breeds excellence. Competition also creates winners, and, inevitably, losers.

Winners are afforded the opportunity to focus on goals, prepare themselves, and, basically, put their best foot forward. Nobody who competes wants to do a half-hearted job, so, win or lose, you’ve lived the life, walked the talk, set out on the journey. Spectators are treated to a chivalrous show of talent. Inevitably, however, there are almost always hard feelings when it comes to a contest. There is arguing over rules, and controversy about what is fair, or not fair.

Losers, and I insist on calling those of us who do not win “losers,” still receive all of the benefits that winners receive, except the glory of success. Winners couldn’t win without us, for there would be no competition without contestants. I have personal interest in the behavior of the “loser.” Losers can walk away, confident that they did their best, but with the knowledge that there might always be someone better. Losers can learn from the experience to pick themselves up and do better next time. What can be learned from losing is immeasurable, yet there are always sore losers, who are quick to complain that something or other about the competition was “unfair.”

The national Scripps Spelling Bee resulted in an historic tie, between two Indian-American students. The press immediately reported racist comments about the ethnicity of the contestants. I recalled some of the comments after our own school bees this and prior years; some students can accept that they did not know a word, or made a mistake, or were outclassed by somebody else, while others will go on and on about how they received “harder” words. If I ever complained about not succeeding due to external factors, I can still hear my father saying to me, “A poor carpenter always blames his tools.”

I recently witnessed a dance competition where five couples vied for the best knowledge of repertoire, form and style. Of the five couples, two made visible errors in form and or content knowledge. By the final dance rounds, it was a decision really between three couples. Four out of the five couples were mixed gender regular partners. One couple was two women who did not dance regularly together. The two women proved to be the dark horse; all in the audience agreed that these two women were head and shoulders above the other pairs.

When the judges announced the winners, the two women were shocked. They claimed that they’d only entered “for fun,” and did not actually expect to win. The judges, rightly, stuck with their decision. The remaining couples were certainly good, but their movements were perfunctory, we all agreed. In terms of representing the United States – yes, for a first time competition, it was a pretty high stakes contest! – the girl-girl couple, with their flair, their smiles, and their ability to switch gender roles back and forth on the dance floor even, was refreshing; a stand-out performance.

One of the presumably runner-up couples left the venue in consternation. Whatever their beef was, leaving was bad form, and bad sportsmanship. In this way, people show their true colors, their insolence, their anger, their selfishness. They lost. Not because they lost the contest, but because they lost their cool.

Before I had a chance to publish this article, follow up news about this contest came to my attention, hot off the press. The person who put together the conference ended up disqualifying all of these participants because of the acrimony that ensued after this first time effort at such a contest. He generously offered to make good on the prize aspect of the tournament for all involved, but admonished various parties for not following the rules. I hope the competition will continue in the future, although lots of my fellow dancers didn’t like the idea of our hobby being turned into something “competitive.”

My kids grew up in an era where trophies lost their meaning. For every sport they played, win or lose, a kid got a trophy just for participating. Parents would stand by while coaches strained themselves to say something positive about every child. The trophies took over our closets, until we finally had to clear them out. I had my children sort through the tons of them and pick out a few meaningful trophies, which inevitably were from the few times they actually won a championship. Sometimes the sports organizations didn’t even keep score of the little tykes’ basketball games. I mean, why would you play, if not to win? Just to learn the game? That’s what I thought practices were for!

And again, just as I was about to send off this essay for publication, the yearbook came out at our school. An excellent job was done by all on our yearbook. But, every time I see a yearbook, I am taken back to my own youth. You always look at who is chosen for “Best Eyes” or “Most Likely to Succeed.” Sometimes you say, “Yeah, he totally has the best eyes!” But sometimes, like today when I saw the pages, I found myself disagreeing with some of the choices and feeling disappointed, saying, “Aw, it’s just a popularity contest.” I found myself spouting the same kind of complaint that I’ve been whining about in this article! It made me realize yet again that I have to allow winners to be winners, and not waiver on my reputation of “not knowing no.” One must strive to make lemonade out lemons, no matter what. “Right” does not always win out over “popular,” and, even then, you persevere.

Another example: so many of my students over the years have stated that they wish to become professional athletes, yet, they fail to realize that they’d have to have already shown dedication, physical prowess, the willingness to practice, and passion to win from an early age. They had to have been prepared to pursue the sport, and show competence in the day job of school in order to succeed. In all cases of the goal setting required to keep your eye on the ball in order to be a winner, you have to be willing to play the game, step up to the match, and conquer your rivals. Kids will sit and do this via video games on a daily basis, why not in “real life” as well?

Not everyone can be a great athlete, not everyone can get all A’s, and not everyone is gifted or talented, and nobody really knows who IS the most likely to succeed, either. The important thing is to try your hardest, and grin and bear it when you realize you are not the best. Instead of “sour grapes” when you lose, conversely, have admiration for those who do better than you, and figure out how to beat ’em next time.