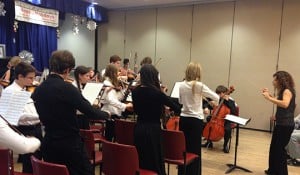 The AVPA music department has been preparing all semester for the Spring Music Concert, which takes place on Friday, May 30, at 7pm in the Robert Frost Auditorium. The Chamber Singers, String Ensemble, Jazz Ensemble, Jazz Combo, Flute Ensemble, and Concert Band will perform a wide variety of music. From a suite from the movie Psycho, to iconic American music by Aaron Copland, students have been learning diverse styles and genres.

Three world premieres of student compositions will also take place on the concert. Celebrating the 50th anniversary of the opening of Robert Frost Auditorium, three students have composed music based on poems by Robert Frost. Frost, American Poet Laureate and four-time Pulitzer Prize winner, also read at John F. Kennedy’s inauguration in 1960. The building was completed in 1964, a year after the poet passed away. The naming of the building came from a contest sponsored by the school board who looked for suggestions of a successful Californian. Frost, born in San Francisco, was the winner.

The music program has had a busy spring semester, with performances of Kiss Me, Kate, the spring Dance Concert, and various community and school performances, including the Jazz Combo at the CCEF Tribute to the Stars event at Sony Pictures Studios. The Concert Band has also performed at the SCSBOA Music Festival in March, and will attend Music in the Parks Festival on May 17, along with the Jazz Ensemble.