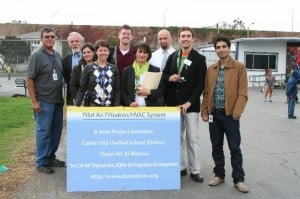 Culver City Unified School District prides itself on partnerships that are formed when a need is voiced and various stakeholders step up to create effective change. Parents, teachers and the school principal at El Marino Language School along with district staff have engaged in a collaborative process in the last two and a half years to address air pollution concerns at the school. “Advocates 4 Clean Air, El Marino” was formed in November 2011 to address air pollution concerns related to the close proximity of the school to the 405 freeway. As a result of this proximity, school children at El Marino are exposed to air pollutants generated by cars and trucks. These pollutants have potential negative health effects on children’s developing lungs.

“Advocates 4 Clean Air, El Marino” is affiliated with the El Marino Language School PTA. From the early stages of its formation, it has continuously worked to inform the public about the need for filtering the air entering the classrooms at El Marino that is laden with air pollutants, such as ultra-fine particles and soot, spewing from the exhaust pipes of cars and diesel trucks traveling on the I-405, which is literally across the street from the school. Most of the school is within 500 feet from the I-405, in very close proximity to the freeway.

The Culver City Unified School District is working in partnership with the “Advocates 4 Clean Air” to identify the best available methods to filter the air in order to remove traffic-related pollutants, including particles, from the classroom environment to as great a degree as possible. Recently, an HVAC system (donated by Ferguson Enterprises) with an integrated series of extremely efficient air filters (donated by IQ Air) was installed by the District in the kindergarten classroom that is closest to the freeway. The purpose was to allow for an accurate measurement of the degree to which air pollutants generated by freeway traffic could be removed from the air entering the classroom. So Cal Air Dynamics performed the work to install the HVAC and filters and, after completing the installation, tests were soon scheduled to begin under the direction of Dr. Rania Sabty-Daily who has been one of the guiding lights of the Advocates 4 Clean Air since their formation.

In recent months, the ability of highly efficient air filtration to remove air pollutants from the classroom air has been successfully demonstrated in a series of scientific measurements. These measurements were made with air monitoring equipment provided by USC (Center for Community Outreach and Engagement, Southern California Environmental Health Sciences Center), and the South Coast AQMD. These studies indicated the removal efficiency average for two components of vehicle exhaust, ultra-fine particles and black carbon, was 93% in a room equipped with a pilot filtration/HVAC system at El Marino. Measurements were taken over a period of 36 hours and showed that traffic-related air pollutants, including ultra-fine particles, can be effectively removed from air that enters the classrooms, by the installation of adequate ventilation and extremely high quality air filtration.

Dr. Sabty-Daily is a Professor of Environmental Health Science at California State University Northridge (CSUN), and Trident University International, and therefore brings a wealth of knowledge and experience in community-engaged environmental research, evaluating children exposure to traffic-related air pollutants and identifying potential solutions to purifying the air in the classrooms. Rania also brings numerous professional connections with representatives from a large group of governmental, educational and non-governmental organizations that share a concern and focus on what is referred to as “Near Roadway Pollution” research. These groups include several major universities (USC, UCLA, and CSUN), NRDC, CalTrans, SCAQMD, the EPA, and other entities that are extremely interested in the research being conducted by Rania and her colleagues at our El Marino Elementary School. One of her colleagues, Dr. Nola Kennedy, is Professor of Environmental Health Sciences at CSUN and has been involved in measurement of air pollutants at El Marino.

Stephon Litwinczuk, the Community Communications Coordinator for the Advocates 4 Clean Air, El Marino is another devoted member of this advocacy group who happens to be an extraordinarily talented filmmaker. He has been filming the efforts of the group to educate the community as well as the collaborative efforts of CCUSD and the Advocates 4 Clean Air in their ongoing search for solutions to the air quality problem.

Tracy Pumilia, Principal of El Marino Language School, has also been an active leader and participant in the search for the solution to the problem as well. Tracy has been a frequent participant in seminars dealing with the health issues of Near Roadway Pollution, along with Rania, Stephon, and CCUSD Assistant Superintendent, Mike Reynolds.

School teachers have been involved in the efforts of “Advocates 4 Clean Air.” Teacher Christina Paul and retired teacher Roberta Sergant have been instrumental to the effort of this advocacy group.

The present plan is for an intensive engineering analysis of available air filtration delivery systems that may be installed in El Marino. This will be conducted within the next few weeks to identify the best choice for the El Marino Language School classrooms in terms of efficiency and cost-effectiveness. Air filtration at El Marino Language School is on the list of the CCUSD Needs Assessment that is being considered as part of Measure CC, a CCUSD General Obligation Bond that will appear on the June 3 ballot.

Additional information on the Advocates 4 Clean Air, El Marino can be found at: www.cleanairem.org.