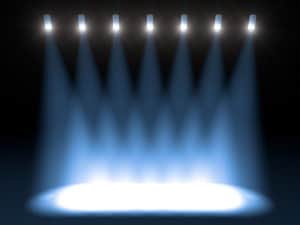 One of the last vestiges of my childhood shyness was my reticence to be seen on a stage. I’d had a bad experience with my 5th grade “States Report.” I was given both North and South Carolina, as if one state were not enough, and I dropped my index cards on the way up to the podium. Whatever facts and figures I’d prepared to spew forth became nonsensical. The kids laughed at me, and I dreaded public speaking after that.

It was a tough audience. I had just arrived into this new grade of students, not knowing a soul, having been one of a handful of kids who skipped half a grade instead of being “left behind” to complete a year and a half of 4th grade. This was one of the generational upheavals in education of the late 1960’s, when the “big idea” was to get rid of allowing students to enter school every semester, instead of once, in September, the way it is now. The adjustment was made just as I would have been entering 5th grade, in 1968. I was goofy and awkward in front of my new potential “friends;” I certainly wasn’t joining the ranks of the popular kids right then.

This aversion to public speaking continued through 7th Grade, then the first year of so-called junior high school, which is now the second year of middle school, and the very grade that I teach. 7th grade English was the bane of my existence; we had to make speeches EVERY Friday. All I remember is the terror associated with doing so. Our well-intentioned teacher, a bachelor who I later found out played bridge with my parents on the weekends, barked out personal critiques after each one of us spoke: “too many um’s, no hands in pockets, louder,” I echo him in my classroom to this day.

There’s a difference, though: my students are comfortable on the stage. When I adopted the concept of arts integration into my teaching eight years ago, then two years into this ten year career, the front of my small classroom was turned into a stage for everything from mime to persuasive speech making, from African drumming to a poetry cafe, from modern dance to the choral recitation of classical Japanese poetry in translation…shall I go on? When I went on to create a school-wide student-run production company and a student court along with my in-classroom arts antics, I was given a room containing a stage this past year. And boy have I put that stage to good use! On it, the first Dance Troupe CCMS has ever had has been born.

Our 11-14 year-olds have developed stage presence and confidence both on and off the stage. They’ve learned to exert their creativity by being different and new. They set their own goals for practice, only because they figured out that you get better and more confident if you do, not because anybody else is telling them to do it. They work as a team. A recent reality check was our finale of the year; it emphasized the necessity to, simply, show up.

This “finale” was a culminating performance task, which qualified as this year’s final assessment. It was called “a visit to “The Apollo THEATRE,” where the students choreographed their own swing DANCE routine to Duke Ellington’s MUSIC, surrounded by VISUAL ART they’d created while LISTENING to a Wynton Marsalis jazz tutorial produced by Lincoln Center. The WRITING assignment included two haiku and a sonnet, six lines of which they SPOKE aloud on stage along with the recitation of one of six Langston Hughes poems they had READ in class. The capitalized words are the eight domains of arts and language arts that make up the curriculum of my class.

The only way not to get 100/100 was to: not be in costume (simple: black clothing), or not recite the personal poetry, or not show up at all. 95% of the students achieved 80% or better. The 5% who did not show up for one reason or another were given an appropriate alternative assignment: write a 1000 word essay answering the prompt: “how does The Arts create acceptance of minority cultures.” I loved the essays I received; here’s one excellent quote from 7th grader Frances Horwitz, who recently starred in the school-wide performance of Seussical, “If a certain group creates (a form of art) that can help and interest other groups, a new appreciation and respect is subconsciously given.”

In the process of creating stage(s) for my students, I finally ascended the stage myself.

Now, my days of fearing a mike ended years ago, during my travel industry career. My boss, a Vice President at American Express, and one of the greatest mentors of my life, had arranged for my company to give a talk about Travel to the local elementary school. He informed me I was doing the talk, and when I demurred, he told me, “you’ll have to get over that, if you want to be an executive. Executives make speeches.” Within twenty years of that pep talk, I was speaking for a living.

But I still resisted anything where one was expected to “perform” on stage, which, to me, seemed different than making a speech. My life’s hobby and passion happens to be dance, which I use as a physical and social outlet most of the time. But dance IS also a performance art, and over the course of the past few weeks, I was finally beckoned to the stage myself. I summoned up the courage by an out of body experience where I imagined that I was one of my own students being prodded onto the stage.

The first time, which occurred a couple of Wednesdays ago, was when I was chosen to participate I’m a little dance competition at my Israeli dance session. I was unprepared, maybe even unworthy, but I had the spirit, and rose well enough to the occasion. I didn’t win, but, all contests being valuable life experiences, I came away proud of myself.

The second and third time came quickly together, were at the (Israeli) dance camp I attended this past weekend. In both cases, I was the ringleader of performances done in front of the the gathered crowd of 200-300 people. On the first one, I dressed myself and a bunch of friends to look like a famous Israeli choreographer, and we performed one of our favorite dances of his. I knew the steps to the dance by heart, and was prepared to lead the others, but I totally froze up the minute the first few bars of music were played! Still, it made us own the event beyond just being spectators; it created a wonderful memory that remains in a photo uploaded to our Facebook pages.

I was then emboldened to go back for more at our usual Sunday night “talent show.” One of our dancers is a long-time Israeli dance denizen, but a major name in Southern California when it comes to the salsa and Rueda de casino scene. I figured if we had her to lead us, plus a few more of us to follow, we would have a little routine to do on the stage for the talent show. She demurred at first, feeling shy about it, but we finally found four other victims to join us, and, up we went, onto the stage. I even prepared a little speech to explain what we were doing. This time, everything went well, even better than expected, and we received excellent feedback from our audience there, and subsequent Facebook “likes” on the video that was uploaded. Our salsa queen thanked me now twice for pushing her to do it.

We were all enriched by our willingness to put ourselves out there, participate, be in the moment, collaborate, and share with others. And, you can really get used to enjoying a little adulation now and then.