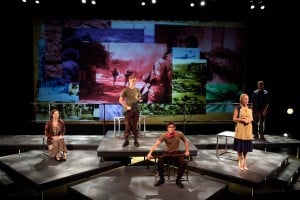 If All the Sky Were Paper was written by Carroll based upon his New York Times bestselling books War Letters and Behind the Lines. Carroll launched the Legacy Project in 1998 – a national, all-volunteer initiative that works to find and preserve wartime correspondence from all of America’s wars. Since then he has traveled to 40 countries, including Iraq and Afghanistan, to seek out what he calls “the world’s greatest undiscovered literature,” and has collected more than 100,000 previously unpublished letters (and now emails) from every conflict in U.S. history.

If All The Sky Were Paper features the best of letters published in War Letters and Behind the Lines, ranging from the War of Independence to the present day. Actors take on the roles of the military men and women and their loved ones at home, acting out the full spectrum of emotions and experiences contained in the letters. From the incredible drama of the human experience in battle to the pathos and humor of everyday life on the front and the home front, audiences will be moved and inspired by the correspondence of those caught up in the American Revolution, Civil War, World Wars I and II, Korea, Vietnam, Desert Storm, Iraq and Afghanistan.

The play has recently been awarded a prestigious grant from The National Endowment for the Arts and a grant from Cal Humanities to help reach audiences around the country through a series of readings and performances.

The newly created Center for American War Letters, which Carroll founded, will house the Legacy Project’s collection at Chapman University.

If All The Sky Were Paper will have one performance only on Monday, June 9 at 7:30pm at the Kirk Douglas Theatre, 9820 Washington Blvd, Culver City, CA 90232, located in downtown Culver City, just a few blocks south of the I-10 Freeway and across the street from Sony Entertainment Studios. Culver City Hall, behind the theatre on Culver Blvd, provides FREE covered parking. Dozens of restaurants and generous street parking are available in the surrounding area.

Celebrity guest artists are to be announced – check the website for updates at www.lexikatartists.com. To order tickets, visit www.brownpapertickets.com or call 1-800-838-3006. Ticket Price is $25. Veterans with Veteran ID are admitted for free. Running time is 80 minutes. A portion of ticket proceeds will support United States Veterans Artist’s Alliance (USVAA) and the Wounded Warrior Project. The performance will be followed by a reception with the director, writer and actors.