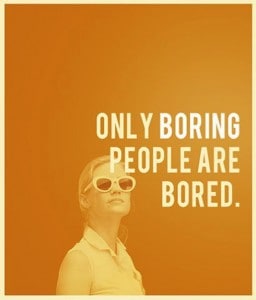 My father used to paraphrase a quote originally said by Gilbert K. Chesterton, “There are no uninteresting (boring) subjects, only disinterested people” Boredom never existed at my house. My father had many hobbies, including: Chess, Bridge, Blackjack, reading, dancing, and, later in life, Poker. He expected my mother to join him at most of them, and she did. Whenever I wonder if they’d have stayed together if my mother had lived past 55, I imagine that they would not have split up, because of the many activities that they shared.

Generationally, I have often said that I don’t have a problem with my children cussing, but, boy, if they ever said they were bored, I’d be mad. When I see a child lay down the gauntlet of boredom at the feet of their parents, and then watch the parent leap into frenzied, guilt-ridden action to try to occupy their young one, I cringe. A child cannot really be bored at five or eight or thirteen; there is just too much living left to do to be bored.

I believe that boredom is a quick-and-dirty label for what is actually depression, codependency, and the occasional situational “boredom” that comes from what I will call obligatory physical entrapment, and I don’t mean slavery.

Let’s start with what I mean by obligatory physical entrapment. No, I am not speaking of the American historical blots of Confederate slavery or Japanese-American internment. I am not talking (for once) about Jews in ghettos or concentration camps, either. To me, obligatory physical entrapment is when you are required to be somewhere through your personal or professional responsibilities. In situations like this, and only in situations like this, I have sometimes felt the ache of “boredom,” which is defined, according to Wikipedia, as “an emotional state experienced when an individual is left without anything in particular to do, and not interested in their surroundings.”

I have been bored when I’ve been forced (by a best friend or relative’s desire to save on expenses) to go stag to a wedding, but they’d managed to spring for a live band playing wonderful partner dance tunes at the reception. I am fit-to-be-tied bored when there’s nobody to dance with. I have actually sworn off ever putting myself in that situation again. When discussing the phenomenon of boredom with a colleague, she reminded me that I claimed to have been bored one other time recently, when I was required to sit through a work presentation that I’d heard three times prior. I couldn’t even amuse myself on the one amusement device I’d brought, because it had powered itself down after so many hours of usage. A student of any age, when forced to sit in a “grade level” classroom to learn concepts they have already mastered makes that classroom fertile ground for the development of stifling boredom. Basically, anytime you are being “taught” something you already know? Recipe for boredom.

Next, I do not claim to be a psychologist in any way, shape or form, but I do have opinions galore about human behavior. My eight year-year-old nephew asked our friend yesterday, “what does Aunt Ruth write about?” He said, “She basically writes about her experiences, and how she feels about them. That’s why she calls it, Ruth’s Truths.” Yep, that’s it in a nutshell. So, here’s how I have the audacity to relate boredom to codependency:

Codependency comes in many flavors and definitions, but I want to use the term in its sense of “being overly dependent on others to function in day-to-day life.” For example, a person can learn to be punctual by judging how much time they need to get out of the house, determining exactly how long it will take to get from point a to point B, doing a little basic math problem, and then setting an alarm well in advance of the requisite time needed. A person who disregards these independent calculations, and instead depends on another person to “wake them up in the morning,” for example, might be called codependent. Similarly, I think a person who claims to someone else, “I’m bored,” or “This is boring,” is exhibiting codependent tendencies of relying on someone else to do something about their boredom. Like, what is the appropriate response to, “I’m bored!” My father’s response was “You’re bored? Go take a long walk on a short pier” ( please read aloud with a heavy New York accent). I am saying that I don’t want to know when someone else is bored; what am I, supposed to “cure” them of this feeling? If they can’t find an activities to amuse themselves, they are welcome to just leave the scene of the boredom, in my opinion.

Finally, again prefacing the next point in my opinion with the advisory that I have no training in the area of depression at all, I assert that the feeling of “boredom” is on the spectrum of depression. I have heard people speak about their depression, and have read about how people feel when they are depressed. I have also witnessed the actions of people who suffer from depression around me. I felt depressed for a few hours last year. My son had come in straight from several months away at college. He arrived sick and with a sprained shoulder from a pick up football accident. The next day, we sent him off on a month-long trip abroad (his first time doing such a thing on his own.) I felt so…sad…that when we got back from the airport, I went in my bed and cried for the better part of an hour, and stayed there for another couple of hours. I couldn’t be bothered to get dressed, eat, or go do my errands. I understand that people suffering from depression feel this way frequently, occasionally, and/or constantly. This feeling can sometimes be cured with various forms of therapy, including medication. So, how does boredom relate? Depression-style boredom occurs when you are frustrated by not having enough to do.

I normally jump out of bed with a physical or mental list of all of the things I want and need to do in a day; 24 hours is never enough, and the excitement of everything from the mundane trip to Trader Joe’s, to the possibility of having a couple of hours to read my book in my comfy chair. Every day of my life includes activities like watching an episode of a favorite show from my DVR Netflix, Amazon Prime or HBOGO accounts (note: NOT flipping through tv channels, but, CHOOSING what I want to watch), to taking a bike ride down to the beach, to my job of massaging middle school minds for six hours a day, to clearing my head to write this article on my iPad, after which I’ll dance at one of my venues for a few hours…and my list of possible activities goes on and on…get this: every day of my life is like that; how could I ever be bored? And if I woke up one day not “feeling like doing any of these things,” and that feeling continued for any significant length of time, like, more than a day, I would know that if I wasn’t physically ill, I might be on the spectrum of mental illness. I’d seek help, I’d get meds even, if prescribed, because, everybody needs to be out, doing things that make them happy, and not…bored.