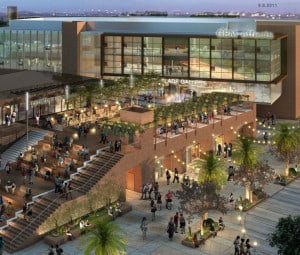 City of Culver City has been given the green light from the State Department of Finance to move forward with critical projects held up for years by the dissolution of redevelopment. The City can now proceed with the development of
such properties as Parcel B in Downtown; the Washington-National Transit Oriented Development (TOD); the Washington/Centinela Marketplace project; and the Globe Avenue affordable housing project.

“Culver City is thrilled to receive this long-awaited news that allows these community-supported projects to take their final steps to become a reality. These
high quality projects will create jobs, provide housing, and grow the local, regional, and statewide economies,” says Culver City Mayor Jeffrey Cooper.
The Parcel B site, to be completed by Combined Properties, is located in Downtown Culver City. In the works since September 1999, this project, which attracted the interest of numerous developers, will realize the community’s vision for this area. This site will be transformed into an exciting array of retail, office and restaurants in an award winning mixed use development.
Another project, the Washington/National TOD, to be completed by Lowe Enterprises, is located at the corner of National and Washington Boulevards
adjacent to the Culver City METRO Exposition Light Rail Line Station.
A landmark transit oriented development, composed of a boutique hotel, residential units, dining, shopping, entertainment, parking, and a large plaza with an amphitheater, will be created.

A third project, the proposed Market Hall and Parking Structure, is located at Washington Boulevard and Centinela Avenue. For over eight years, the former RDA and City had been involved with acquiring, clearing and cleaning this formerly blighted site in order to make it ready for development as a Market Hall and new public parking garage. The Market Hall project, that has been strongly supported by the community, plans to include a small market, food-related services, cafes, kiosks, ancillary office space, and a 290 space parking garage.

In total, there are 23 assets owned and controlled by Culver City’s Successor Agency to the Redevelopment Agency. The assets intended for development total $18.9 million in land sale proceeds and are expected to generate $114 million in tax revenues over the life of the projects. In addition, approximately $2 million will be made available to the taxing entities from parking proceeds. The taxing entities include the County of Los Angeles, the Culver City Unified School District, and the Los Angeles Community College District.