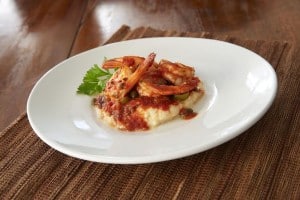 An invitation to sample the new menu offering at the Olive Garden at Westfield Mall took place on a day so cool, I was buttoning up my jacket on the way inside, warding off the breeze that was happily sneaking down my collar. Settled into a spacious room filled with food writers and publishing people, we got a presentation of the new offerings that the Olive Garden was in the process of premiering.

It was almost funny how many people had a special memories of an Olive Garden; for one, it was the place where she and her husband had eaten after getting their marriage license. For another, it was the only venue open on a lonely stretch of weekend. For me, it was a favorite of my mother’s, and as there was one about halfway between her house and mine, a frequent meeting place. But I’d not been for years; ok, more than a decade.

Whatever changes they were making to the menu, I figured they’d have to play to a pretty high standard. Recalling the film “The Big Night,” an opening scene shows an Italian restaurant in 1950’s New Jersey that cannot seem to interest a couple of diners in a risotto, because they truly do not know what it is. “Where’s the spaghetti and meatballs?” The chef is beyond insulted.

In Culver City of the 21st century, most diners are savvy enough to want something more than the reliable fettucine alfredo or lasagna. Many could give you an opinion on calamari fresco or spinach gnocci al pesto. Italian needs to be a lot more than spaghetti and meatballs these days.

First – the salads; two new salads, not too far away from Olive Garden’s signature of light, fresh produce. An ‘Antipasti Salad’ with iceberg lettuce, hard salami, genoa salami, pepperoni and mozzarella had a nice variety of flavors, and could be further improved by using some romaine or red lettuce along with the iceberg. The next salad was a ‘Roasted Tomato Caprese’ with fresh mozzarella, kale. roasted and marinated bell peppers and roasted tomatoes was a good contrast in crunch, chewy and soft. The flavors combined with basil and olive oil for a satisfying salad. Either of this would have been a pleasant lunch, but we were just getting started.

Small plates, as all the hip eateries have these days, were offered with chicken and shrimp. The chicken were some very spicy Calabrian wings, done with a healthy dose of garlic and chili peppers, and the option of a chili dipping sauce on the side. This item was listed as ‘available for a limited time” possibly to see how hot the Olive Garden patrons are willing to go. These wings were spicy. The shrimp was one of my favorite tastes of the day, served on bed of well textured polenta with a sauce that was almost a green and black olive tapanade with tomatoes and capers. Would that Olive Garden could take themselves just a bit more literally, and really use olives more often and more originally – this dish is a great move in that direction.

Next up – the pasta bar selection – choose a pasta (gluten-free rotini among the choices) choose a sauce (pomodoro and primavera as options) and add a topping (for an additional fee – three kinds of meatballs or sauteed shrimp.) We were offered the large paccheri pasta, a kind of super-sized rigatoni, with the creamy sun-dried tomato sauce and chicken meatballs.  The sauce was surprisingly good, with finely minced sun-dried tomatoes balancing with garlic and cream like a good solo artist with a strong back-up band.  The texture of the sauce was light enough to compliment both the pasta and the meat, and using chicken as a base for the meatball made the dish filling without being overly rich.

Even more offerings were presented, and as this was becoming the biggest meal I’d had since last Thanksgiving, it was delightful that they were on the ‘lighter fare’ menu. ‘Chicken Abruzzi’ – sliced chicken breast over sauteed kale, white beans and veggies, and ‘Salmon Bruschetta’ a grilled filet with bruschetta style tomatoes and basil pesto, served over a seafood risotto. Both were great; the kale was cooked to a wonderful texture, just wiled enough to absorb the olive oil, lemon juice and garlic, and the beans and chopped onions and peppers blended well. The salmon, which had so many flavors going on it should have been too much, was outstanding. While calling the rice and seafood supporting the dish a risotto was an exaggeration if not an outright misnomer, (orzo pasta rather than rice, no cheese, more of a crab flavored stock than the thickness of a long simmered sauce) it worked well.

While I can’t imagine coming in and ordering a full five course meal (dessert was so bad it was pointless) I could certainly consider making a feast with some salad and small plates, or splitting an order of salmon or pasta with a friend. It’s a lot of food.

I had a good deal more difficulty buttoning my jacket as I left, but I’m sure it won’t be another decade before I go back – there was a chicken and gnocchi dish on the menu I didn’t get to try, or the roasted asparagus appetizer, and a tortellini al forno that looked intriguing.  Chicken meatballs do make a bit of difference even if you are just looking for plate of spaghetti and meatballs, and the Olive Garden now has some higher standards .