NASA’s Kepler mission recently announced the discovery of 715 new planets. These newly verified worlds orbit 305 stars, revealing multiple-planet systems much like our own solar system. This brings to nearly 1700 the total number of “exoplanets” found thus far within our galaxy.

“The Kepler team continues to amaze and excite us with their planet-hunting results,” said John Grunsfeld, associate administrator for NASA’s Science Mission Directorate in Washington. “That these new planets and solar systems look somewhat like our own portends a great future when we have the James Webb Space Telescope in space to characterize the new worlds.”

Since the discovery of the first planets outside our solar system roughly two decades ago, verification has been a laborious planet-by-planet process. Now, scientists have a statistical technique that can be applied to many planets at once when they are found in systems that harbor more than one planet around the same star.

To verify this bounty of planets, a research team co-led by Jack Lissauer, planetary scientist at NASA’s Ames Research Center in Moffett Field, Calif., analyzed stars with more than one potential planet, all of which were detected in the first two years of Kepler’s observations—May 2009 to March 2011.

“Four years ago, Kepler began a string of announcements—of first hundreds, then 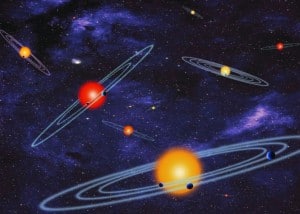 thousands, of planet candidates—but they were only candidate worlds,” said Lissauer. “We’ve now developed a process to verify multiple-planet candidates in bulk to deliver planets wholesale, and have used it to unveil a veritable bonanza of new worlds.”

KEPLER THE MAN – The man for whom this mission was named deserves to be better known. Johannes Kepler (1571-1630) was born in Germany (then part of the Holy Roman Empire). He was a sickly child and his parents were poor. But his evident intelligence earned him a scholarship to the University of Tübingen to study for the Lutheran ministry. There he was introduced to the ideas of Copernicus and delighted in them. In 1596, while a mathematics teacher in Graz, he wrote the first outspoken defense of the Copernican system, the Mysterium Cosmographicum.

Forced to leave his teaching post at Graz during the Counter Reformation because he was Lutheran, Kepler moved to Prague and became an assistant to the renowned Danish astronomer, Tycho Brahe. He inherited Tycho’s post as Imperial Mathematician when Tycho died in 1601. Using the precise data that Tycho had collected, Kepler discovered that the orbit of Mars was an ellipse. In 1609 (the same year in which Galileo pointed the first telescope to the stars), Kepler published his own discoveries, which are now called Kepler’s first two laws of planetary motion.