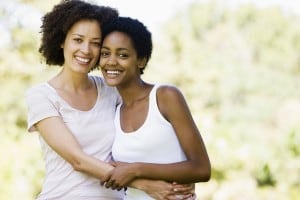 Mothers and daughters have the most intense relationship on the planet.

Most mothers and daughters like to talk. This is how we connect and feel loved.
And, as many fathers will tell you, sometimes we talk too much.
Any asset can also be a liability.

At any rate, once adolescence starts to transform your little girl into a young woman, you may wonder where the sweet little girl went who once adored you and wanted to wear matching clothes. By age 13 she may want to sit on your lap one day, and slam the door in your face the next.

As mothers, we want to connect. We are the great nurturers of the human race.
The only problem is, when our daughters start to pull away in order to develop their own identity separate from us, we think the solution is to connect more, talk more.
Not! This is the mistake I, and many mothers make which often leads to more conflicts with our teenage daughters.

We need to learn to stop and think before we react with verbal garbage we may regret later.
“Talk less and listen more” became my mantra with my teenage daughter and it helps in all relationships. (Ah yes, there’s a gift in everything, always more to learn in every situation. “No pain, no gain”, like it or not.)

My best advice to mothers of teenage daughters is self-respect and setting limits.
Mothers of daughters need to develop more respect for themselves and their limits.
When a mother is in touch with her own self-respect, she will know what limits to set with her daughter (e.g. what favors she will or will not do for someone depending on their behavior). When a mother is in touch with her self-respect and her inner strength, she no longer needs to yell and scream when her daughter gets demanding. The yelling and screaming never works. That’s how you lose control as well as respect.

When a mother knows where she stands, she can calmly and confidently set limits with her daughter from a strong place of self-care, not anger.
Mothers need to stand for themselves, not against others.

Daughters need to see their mothers setting limits out of self-respect, so that someday………. they will be able to do the same.

A special thanks to my daughter, now age 20, with whom I learned so much during her teens.

For a helpful book read:
Riera, Michael, Ph.D. Staying Connected to Your Teenager, How to Keep Them Talking to You and How to Hear What They’re Really Saying, Da Capo Press, 2003