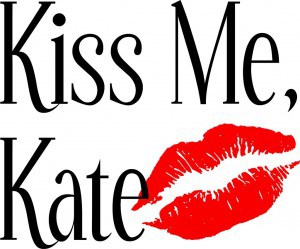 When AVPA puts up a musical, it’s about as musical as can be, and the current production of Cole Porter’s “Kiss Me Kate” is perfect proof. From “Another Openin’ Another Show” in full voice with the optimistic and powerful vocals of Lizzy Ferreira to the show stealing closer “Brush Up Your Shakespeare” by the incomparable Oliver Berliner and Reno Behnken, the singing was the shining center of the show.

I’m imagining that someone, perhaps Noel Coward, bet Cole Porter a case of champagne that he could not turn Shakespeare’s “Taming of the Shrew” into a musical, and Porter had to win that bet. Using the durable show-within- a-show device, Porter has us following a theater producer/leading man (Fred, well played and wonderfully sung by Christopher Clark) and his ex-wife and still leading lady (Lilli, enthusiastically acted and delightfully sung by Tasia Vasilopoulos) into an opening night in Baltimore for their production of “Shrew.”

While animosity and desire still bubble between Fred and Lilli, the second set of lovers (the always remarkable Josh Call as Bill, and the amazingly flexible Clair Skelley as Lois) run one con after another with gambling debts and financially helpful flirtations kept in the air like a set of spinning saucers. Call and Skelley probably have a good twenty shows worth of experience between them, and their thespian instincts keep this underwritten duo both watchable and fun. Perhaps Mr. Porter was simply enjoying a bit of champagne in advance when he named this woman Lois Lane, or he just wasn’t reading enough comic books to notice that there was already a character with that moniker…

Therein lies the rub with “Kiss Me Kate” – it’s a good show. It’s not great or terrific or amazing, it’s good. That this is an awesome production of a good show makes it worth seeing. More than that, it’s really well worth hearing.

In a wonderful number that opens the second act, Evan Wasser suggestively sweats through a Balitmore evening backstage with the whole cast in “Too Darn Hot.” Another great voice, used beautifully.

As Porter may have noticed, Shakespeare shores up the weak spots in many plays with a bit of comedy, and the gangster duo played by Berliner and Behnken (whose resumes in local theater are also of notable length) got every laugh they could get, and a few more besides.

While everyone in the cast did a great job, along with the perfect costumes and well crafted set, they probably did not get the jokes about General MacArthur, or the Dewey/Truman election. But “Kate” wears well, not the latest fashion, still smart.

As with just about everything the AVPA does – DON’T MISS THIS! You will, in fact, leave the theater humming.

For tickets, go to www.AVPA.org