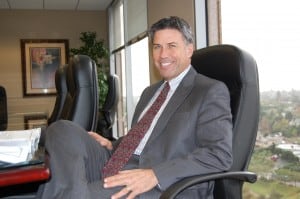 From environmentalists to business leaders and employee groups, it seems as though every influential group in the area is lining up behind Mayor Jeff Cooper’s re-election bid.
In the last few weeks, Cooper has won the support of the Los Angeles County Democratic Party, the Angeles Chapter of the Sierra Club, the Culver City Chamber of Commerce, Los Angeles County Business Federation (BizFed), Beverly Hills/Greater Los Angeles Association of Realtors and the Culver City Employees Association.
“The outpouring of support has been truly humbling,” said Cooper. “I am honored that so many groups representing so many parts of our community have put their faith in me. I am proud of what our city has been able to accomplish over the last four years, and I look forward to continuing to do everything I can to make Culver City the best it can be.”
The groups supporting Cooper touch every corner of the city.
The Los Angeles County Democratic Party (LACDP) is the official governing body of the Democratic Party in the County of Los Angeles. LACDP works in cooperation with the State and National Democratic Committees. LACDP is the largest local Democratic Party entity in the United States, representing over 2.4 million registered Democrats and a population larger than 42 other states in the 88 cities and the unincorporated areas of Los Angeles County.
The Sierra Club Angeles Chapter covers Los Angeles and Orange counties and works to promote the election of environmentally sensitive candidates to public office, and to maintain a working relationship with legislators and other elected officials.
The Culver City Chamber of Commerce represents more than 800 local businesses and works to promote the commercial and economic growth of Culver City, and to foster civic improvements that benefit the general welfare of those who live, work and visit here.
BizFed is a nonprofit, grassroots coalition of more than 170 broadly diverse and dynamic trade groups, associations, chambers of commerce, business improvement districts, and national and regional corporations and institutions spanning Los Angeles County.
The Beverly Hills/Greater Los Angeles Association of Realtors represents over 5,600 realtors and affiliate members in the cities of Beverly Hills, Culver City, Los Angeles, Santa Monica, West Hollywood, and unincorporated areas of Los Angeles County.
The Culver City Employees Association represents the city’s full-time rank and file employees.
Together, these groups and hundreds of individuals are forming a powerful coalition to re-elect Mayor Jeff Cooper on April 8. For more about Jeff Cooper, please visit www.cooperforcouncil.com.