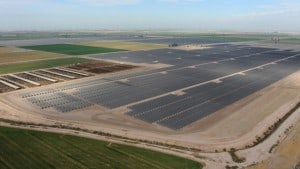 The Center for Land Use Interpretation, in Culver City opened a new exhibition on Friday March 7 exploring the contemporary state of solar power in the United States. The show includes extensive photographs of all existing solar power plants in the U.S. southwest, (see Mount Signal Solar, photo left) many of which were taken “from the air, using aircraft and remote control camera platforms.” A handy interactive map of U.S. solar power accompanies the show.

“This year,” the Center explains, “more energy will enter the grid from solar power plants than ever before. Propelled by federal government incentives and California’s legislated decrease in dependence of fossil fuels, construction started on several $1-2 billion power plants in 2011, with most of them coming online in 2014. With so many proposed projects, and so many stalled in the complicated political and regulatory process, it’s hard to know where things are really at. Over the past few weeks, photographers from the CLUI were dispatched to ground truth the current state of solar.”

Check out the map for the dozens and dozens of sites; meanwhile, here are some aerial shots of some of the largest, all courtesy of CLUI. The resulting installations are equal parts land art and national energy infrastructure—at times strangely beautiful—sprawling and crystalline mirrors shining like holding ponds in the desert.

On view from March 7, 2014: SOLAR BOOM: SUN-POWERED ELECTRICAL PLANTS IN THE USA

Getting there green? MTA buses #33 and #333, and the Santa Monica Big Blue Bus #12 all stop on Venice Blvd. You can also pick up the nearby Culver City Buses #1, #5, and #7 on Washington Blvd. The new Culver City stop on the Exposition Line of the Metro Rail is at Robertson and Venice, two blocks east of the CLUI.