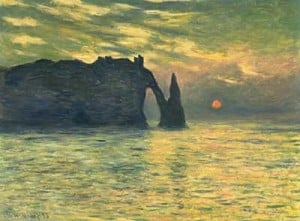 “Claude Monet, founding member of the Impressionist movement, painted a dramatic scene on the Normandy coast,” Olson said. “The canvas shows the orange disk of the Sun sinking toward the horizon near a spectacular line of cliffs.

“We like to use astronomy to show students how science can solve real-world puzzles,” he explained. “We asked, ‘Could we use the dramatic rocks in the landscape and the position of the setting sun to determine where and when, specifically, Monet created this beautiful masterpiece?’”

Monet painted a series of paintings featuring this stretch of the Normandy coast during a three-week visit to the area during the winter of 1883. His painting “Étretat: Sunset” shows a cliff known as the Falaise d’Aval along with the arch Porte d’Aval overlapping a tall, needle-shaped rock spire known as Aiguille (the Needle) that stands just offshore. Key to the image, however, is a low, setting sun just to the right of the landforms. Of all the paintings Monet painted at Étretat, this is the only canvas that includes the disk of the sun, and that one detail opens the door to dating the scene precisely.

To determine on which days in February the sun would have set in the proper location for Monet to capture in his painting, the team of Texas State researchers traveled in August 2012 to France.

Student Ava Pope hiked the beach to find exactly where Monet must have stood. “Ava is accustomed to difficult hiking terrain, and she said that the beaches near Étretat had the most difficult footing she’d ever been on in her life. It’s really tough,” said Olson. “Monet went out there with all of his painting equipment!”

The Texas State team found that the view matched the scene depicted in “Étretat: Sunset” at only one location—a spot 425 yards from the Porte d’Amont on a rocky beach under an overhanging cliff.

Using planetarium software to compare the modern sky to that of the 19th century, the team was able to calculate that the sun would have set as shown in the painting on Feb. 5, 1883. Allowing for some uncertainty, the researchers concluded that the correct date must fall in the range between Feb. 3 and Feb. 7, 1883.

The group then combed through letters Monet wrote from Étretat during his stay, along with weather records and tide tables from February of 1883, to confirm their date. They discovered that on Feb. 3 Monet was working on nearby Jambourg Beach and that the artist spent all day Feb. 4 entertaining his visiting brother. The tides of Feb. 6 did not match the painting, and Monet’s letters show that he paid close attention to the tides. On Feb. 7 cloudy weather and rain storms began. Through the process of elimination, the calculated date of Feb. 5 is the only one remaining that matches the sun’s position, the weather and the tide level in the painting.

Armed with that knowledge, the Texas State team used the height of the needle-like Aiguille formation to calculate the exact time from the altitude of the sun above the horizon.

“We were able to determine the month, day, hour and precise minute—accurate to plus or minus one minute—when Monet was inspired by that beautiful scene,” Olson said. “Monet observed this sunset on Feb. 5, 1883 at 4:53 p.m. local mean time.”