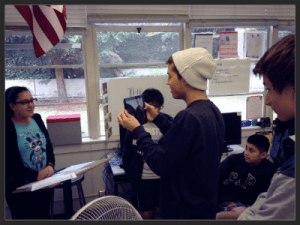 Young Movie Makers is starting their second semester on January 22 at Culver City Middle School. This year we’ve transitioned from an after-school program and have found a home in the Academic Language Development class during the school day. This class helps advanced English Language Learners develop their English speaking skills. YMM is going to enhance the classroom curriculum by involving the Middle Schoolers in the process of writing, producing, and editing a film with their peers. They’re working in groups of 4 students and each group has two volunteer mentors from the Culver City High School / AVPA Film Department.

Last semester, they spent time introducing the young filmmakers to the idea of telling their own personal story. For example, they talked about documentaries, and the students filmed introductory interviews of each person in their group. What do the kids talk about when asked them to introduce themselves? “Well, I would be lying if I said videos games don’t come up. Lots of students say they like to play video games, but when we ask them what else they like to do, we find out some fun facts. In the class we have surfers, skaters, readers, writers, dancers, soccer players and more.”

As with any class, this group of middle schoolers has a great mix of enthusiastic participators and terrified non-participators. One of the most rewarding parts of the program is watching shy students gain confidence and begin to craft their story, so it will be very exciting to see this particular class of students at the end of the year.

They spent the entire first semester writing film scripts and when we return this semester we will tackle pre-production, filming, and editing. Stay tuned to see four fantastic films written, directed, and produced by the students from Culver City Middle School. Coming to YouTube this Spring!